Alia Bhatt raves about Priyanka Chopra, reveals if there's a collaboration on cards

She reveals why the global star inspires her and also spoke about turning friendship into professional association. 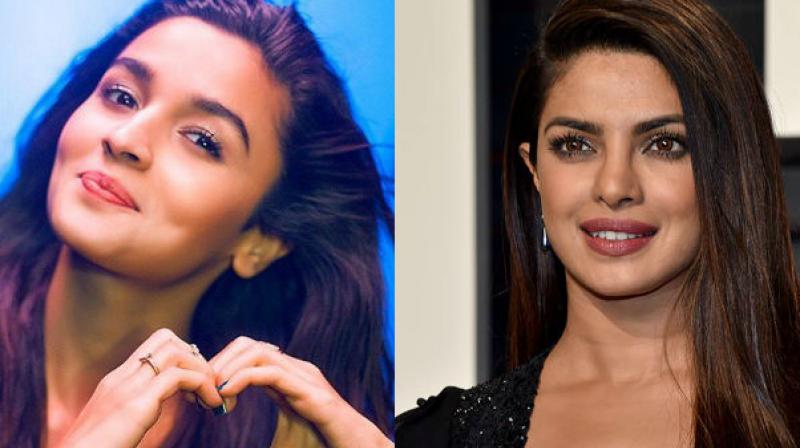 Mumbai: Alia Bhatt is one of those who disproves the adage ‘Actresses cannot be friends’, something her bonding with Deepika Padukone and Katrina Kaif have proved multiple times.

Another actress she is extremely comfortable with is India’s export to Hollywood, Priyanka Chopra.

The duo’s camaraderie was visible at various events and bashes where they were seen together.

This friendship was apparently set to turn into professional association when it was reported that Priyanka had offered Alia, an animal lover, a film on stray dogs in December last year.

This was months after Priyanka lamented about her struggle to cast for a kids’ film she was planning to produce, saying, “In Hollywood, you have films where you have incredible actors who come together just to do four or six scenes. That’s the thing I miss in India. I was casting for this kid’s film and I wanted a big-time female actor to come and do six scenes. It’s a small issue-based film about kids and stray dogs. My mother shot me down saying the actor’s entourage will cost more than the film. So, I will probably end up doing it myself someday.”

Alia was also of a similar opinion when asked about it during an interview with a leading daily.

“I have never been someone who has seen films in that way. It doesn’t matter what screen time I have. I don’t look at it as a parameter or the only diktat to do films,” Alia told DNA.

Priyanka has produced films in various regional languages and Marathi venture  ‘Ventilator’ and Sikkimese movie ‘Pahuna’ were among those well-received and Alia is also impressed by her.

“I’m really inspired by the way she’s doing things. She has produced some amazing films and more so, in different languages. It’s about different corners of India and she’s got a great mind so, she recognises that.”

Coming back to the question of a collaboration on the aforementioned film, Alia said, “I’ve not been offered the film. But if PC did come to me and I find it interesting, I’d love to be a part of that film. It totally depends on the right time and the right subject. I’d happily do it, if everything falls in place.”

With Alia’s latest statement, Priyanka should surely heave a sigh of relief soon and fans would surely look forward to the collaboration.