Isabelle Kaif on her first walk on Lakme Fashion Week, her debut movie and the advice she gets from Katrina. 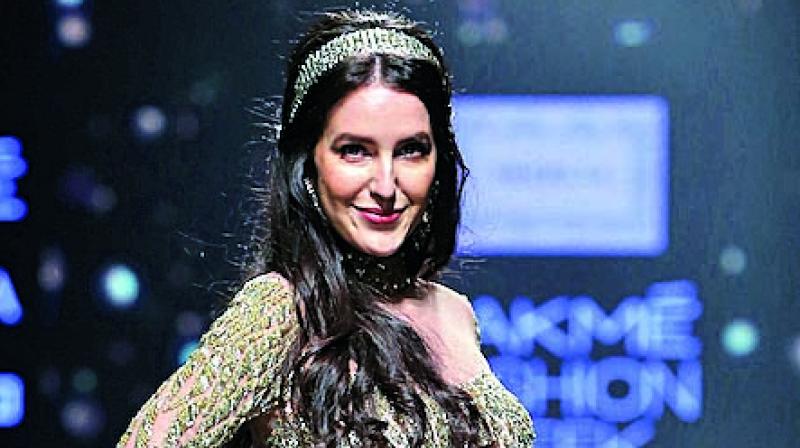 Katrina Kaif’s sister Isabelle Kaif walked the ramp on the last day of Lakme Fashion Week 2019 Summer/Resort for Designer Shehla Khan as one of her three showstoppers alongside Bhumi Pednekar and Karan Johar.

Wearing a golden lehenga paired with a headband, Isabelle was walking the ramp of the Lakme Fashion Week for the first time and was all praise for the designer.

“It was my first walk in Lakme Fashion Week. I couldn’t have been happier.  I am wearing a very embroidered lehenga. It has a very comfortable and sensitive feel to it and also it is very glamorous. Shehla has made me look like an Indian princess,” she adds. Has she read about any Indian princess? “Right now there is Indian princess [Kangana Ranaut] who is ruling quite high in Bollywood,” says Isabelle with a smile and adds, “I am dying to see Manikarnika. The trailer looks amazing.”

When asked about her own style statement, Isabelle says, “It’s casual when I am not working and it is like a laid-back kind of day, but when I am working, I like to get dressed up and I also love to experiment.”

Isabelle who is all set to make her Bollywood debut opposite Sooraj Pancholi in the Stanley D Costa film, Time to Dance, also says that Bollywood has welcomed her with open arms. “I am lucky, blessed and fortunate. I am excited about my debut film,” she says and adds that the rehearsals are over and the film will release soon. But it is not easy to make a mark in Hindi cinema, especially when someone’s Hindi is not on point. Her sister too took time before she was taken seriously. “I am learning Hindi. I also have a diction coach,” says Isabelle. Has she learned the cuss words as well? With a smile, she says, “Whenever one tries to learn any language, the cuss words are something that slips in easily. People usually have fun teaching these words to the beginners…that’s just a way though.”

When asked how is it to be in a protective shelter of her sister? Isabelle says, “It is always great to have someone who can give you the right kind of advice. Professionally too, she can tell me the dos and don’ts. I am fortunate to have a sister like Katrina.”

When asked to tell some pieces of advice that Katrina has given to her, Isabelle says, “Work hard. Be alert... anything can happen so you need to concentrate always. Always be nice to people and focus on your work.”