We have not spoken to anyone and I feel everyone has the right to choose any date for the release of their film, says Sanjay Raut. 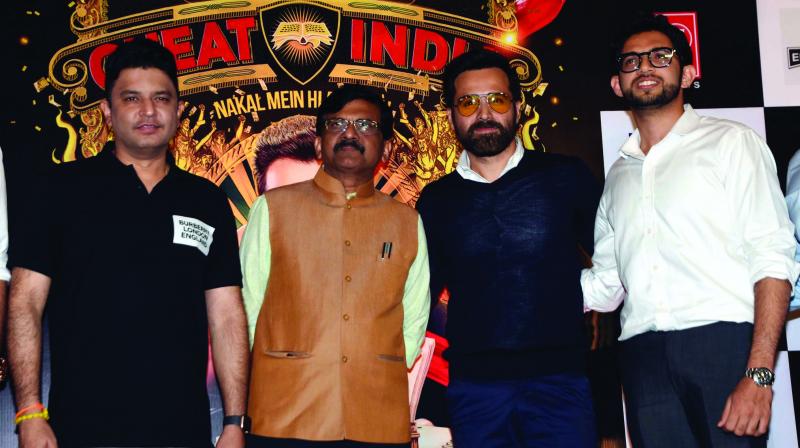 The release of Emraan Hashmi’s film, Cheat India has been brought forward by a week from the earlier date of January 25. The change, which was settled amicably, will help avoid it clashing at the box-office with Balasaheb Thackeray’s biopic.

The team of Cheat India right from producer Bhushan Kumar (T-Series) and Emraan Hashmi to Sanjay Raut (producer of the biopic) and Thackeray’s grandson Aditya were all present at a press conference held recently to announce the change in dates.

The press meet was actually like a mutual admiration society,  as each party kept thanking the other for settings things, especially the change in the release date, that would enable both the films to enjoy a successful run.

When Sanjay Raut was asked whether they had also deliberated with the producers of Manikarnika to  change their release date, he feigned ignorance about the film. “Which film are you talking about,” he said, and added, “We have not spoken to anyone and I feel everyone has the right to choose any date for the release of their film.”

Asserting that Balasaheb Thackeray was a personality to reckon with, Raut said that the happenings in his life were less than a masala film story.” We need to bring up all that happened in his life to the entire country and we would like the younger generation to know more about his life,” he said.

Adding to the process of the change of dates, Aditya said, “Actually when I tried to call them, I too received a call from Atul Kasbekar who told me that he wanted to hold a press conference to announce the change in date for releasing Cheat India. Balasaheb Thackeray’s real life was larger than life and this itself makes an impact of a larger-than-life kind of experience in reel as well. So it’s good that people will get to see both the film. They will watch Thackeray’s biopic and come out feeling angry. People will trust him more and be the angry man that he was. While watching Cheat India they will come out feeling frustrated. Both the films are close to my heart.”

Dismissing suggestions that the biopic was being released for any political or commercial gain, Raut said, “We are not making Thackeray’s biopic for any political gain. When we set out to make the movie, we were sure to complete it within a year. And at that point of time, we did not know the election date as well. We made this film so that people see unke jeevan mein bhi kitna sangharsh raha (how much struggle there was in his life)!!”

Aditya was quick to add, “Truly speaking Balasaheb always stayed away from electoral politics. So it would not be fair to think that we are making the film for political gain. He could not pay money for his own education, so later on life he went on to see that children could get education. He had his own ideologies, followed them, took an issue and moved forward with conviction. The youth and all others will surely get inspired watching his life story, they will learn to move ahead successfully with their own ideologies and be able to go ahead making their future successful.”

When it was suggested that Aditya is a great orator like his grandfather, he replied, “I am indeed not a great orator. I cannot give speeches at all. I can only participate in conversations with people. Being compared to him will be truly unfair. I can only take a step forward that he has created. He would also prefer me to be in my skin and do what I am comfortable doing.”