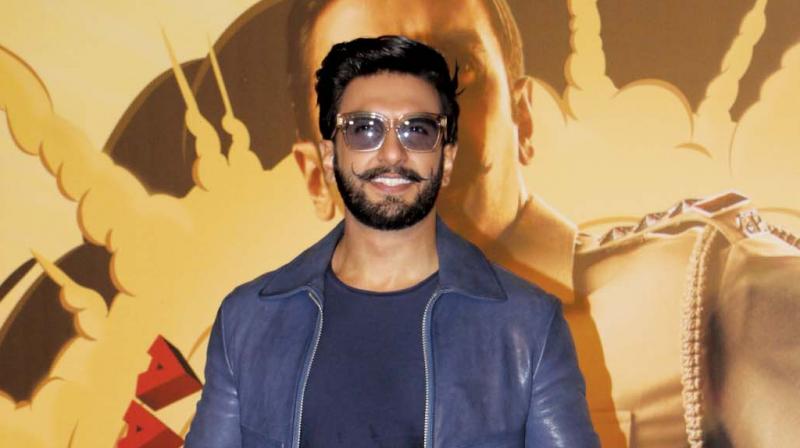 The trailer of Ranveer Singh’s much-awaited masala entertainer Simmba was unveiled yesterday. The actor who recently tied the knot with Deepika Padukone revealed her reaction after watching the trailer.  “Rohit showed the trailer to Deepika on my birthday. She usually never reacts but as soon as the trailer got over, she said ‘you were looking hot’,” he grinned.

The actor who looks absolutely effortless in the role of a cop couldn’t stop gushing about the director Rohit Shetty. Ranveer says, “I have been a huge fan of Rohit as he has made some of the greatest box-office hits. I have been a huge fan of the Singham franchise. I have grown up watching Ajay Devgn and he is a true macho hero. So sharing screen space with him was a dream come true. I had a great experience collaborating with both of them. My potential as an actor has been extracted in this film. There is emotion, comedy which was very exciting and fulfilling to do.”

Talking about his favourite Singham franchise the actor said: “Singham is a story of someone we haven’t seen before, of a larger-than-life hero. It’s an experience I will never forget. When you go to the single screen, there are whistles and dances. We love our heroes and love watching such films. I hope Simmba offers the same.”

Simmba also stars Sara Ali Khan and Sonu Sood among others and will hit the screens by the end of this year.  “I was waiting for a chance to work with Rohit.  You have to earn the right to do some good work and then only you will get the opportunity. I have manifested and I have achieved. Nobody projects heroes like Rohit and that’s why everybody wants to be in his films. It’s an honour for me to be part of his film,” he added.

While cop films have always been a safe bet in Indian cinema, Rohit reveals the element that works. He says, “A cop film is the reflection of our society. So it works if you show the current scenario of the society. Films that reflect the society work. You have to deal with the problem.”

The film will also have a special song, which will also feature Karan Johar in it. Ranveer says, “ I don’t want to ruin it for everybody as it’s a nice song.” Adding to this Karan added, “I am the biggest flop actor of Indian cinema. I cannot afford to be on screen anymore. It was my dream to give one hit film so this was my only chance to remove the jinx.”