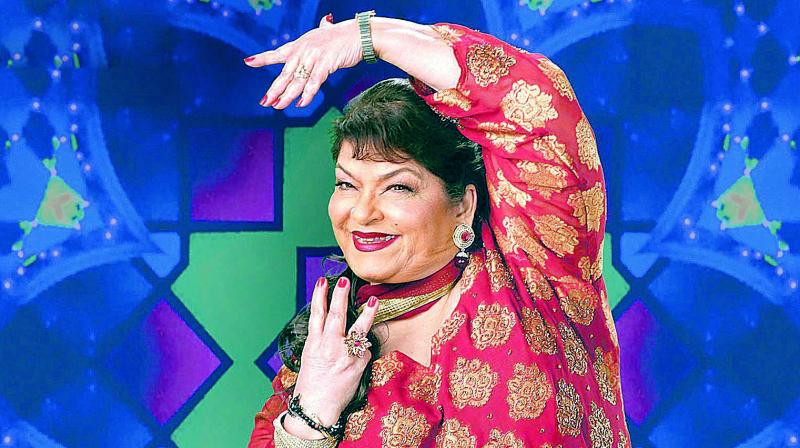 Veteran choreographer Saroj Khan, who choreographed some of the most iconic dance numbers in Bollywood, is no more.

The 71-year-old was keeping unwell for some time and was admitted to the hospital for breathlessness before losing her life to cardiac arrest.

Fondly referred to as ‘Masterji’, Saroj Khan was just three years old when she was introduced to dance. Under the tutelage of dance director B. Sohanlal, Saroj Khan nursed her talent and went on to work as an assistant choreographer for several years.

Her first independent work was Geeta Mera Naam, although she came to the fore after she choreographed Sridevi in the iconic dance number Hawa Hawai in Mr. India.

“She defined a generation of heroines. Certainly #MrIndia would not have been same film without #SarojKhan. You had to see her dance as she rehearsed with SriDevi. She was mesmerising. And what energy! You could shoot all night, yet she smiled and danced constantly fresh (sic),” mourned Mr. India’s director Shekhar Kapur.

Saroj Khan not only produced some of the most legendary dancescapes in Bollywood but also moulded the grace in Madhuri Dixit Nene to make her the unparalleled dancing diva she is known as.

Missing the lady who taught her nuances of adaa and bhaav in films such as Karma, Tezaab, Ram Lakhan, Tridev, Khalnayak, Beta, Raja, Devdas, Gulaab Gang and finally in last year’s release Kalank, Madhuri took to social media to post a tearful eulogy.

“I’m devastated by the loss of my friend and guru, Saroj Khan. Will always be grateful for her work in helping me reach my full potential in dance. The world has lost an amazingly talented person. I will miss you. My sincere condolences to the family. #RIPSarojji (sic),” she wrote.

In addition to Madhuri Dixit Nene, Khan’s legacy also survives with the filmmaker Subhash Ghai’s leading ladies. She was instrumental in grooming Ghai’s heroines such as Meenakshi Seshadri, Manisha Koirala, and Aishwarya Rai Bachchan for films ranging from Hero to Saudagar, to Taal.

“Absolutely my personal loss. She was an integral part of our Mukta Arts family She was my strong partner in grooming stars like Madhuri, Meenakshi, Manisha and Aishwarya. Master of masters. Saroj Khan will live in the history of choreography for Indian cinema indeed. Bye JAAN. RIP (sic),” wrote a devastated Subhash Ghai.

Shah Rukh Khan recalls the choreographer as his first genuine teacher in the industry. “Saroj Khan taught me for hours how to do the ‘dip’ for film dancing. One of the most caring, loving, and inspiring persona I have ever met. I will miss you Sarojji. May Allah bless her soul. Thank you for looking after me,” said Khan.

She choreographed all the songs in my film, Tango Charlie, starring Ajay Devgn and Bobby Doel, and also in Mukhbiir. Her creativity was grounded and the best part was that she reflected the essence of the lyrics in her dance moves.

Once, I remember, she was very strict with Tanishaa Mukerji, making her rehearse several times. I asked Saroj Khan to go easy on her, but she said that she had also worked with Tanisha’s mother Tanuja, and would not rest until Tanisha got it to perfection.

Sometimes, she would sit in a chair on the sets with half-closed eyes; we would think that she was sleeping, but she would actually be watching.