‘If anyone touches you, tell me’: When Sanjay Dutt showed solidarity with SRK

Shah Rukh Khan was also one of those to gain from the controversial star’s helpful nature years ago. 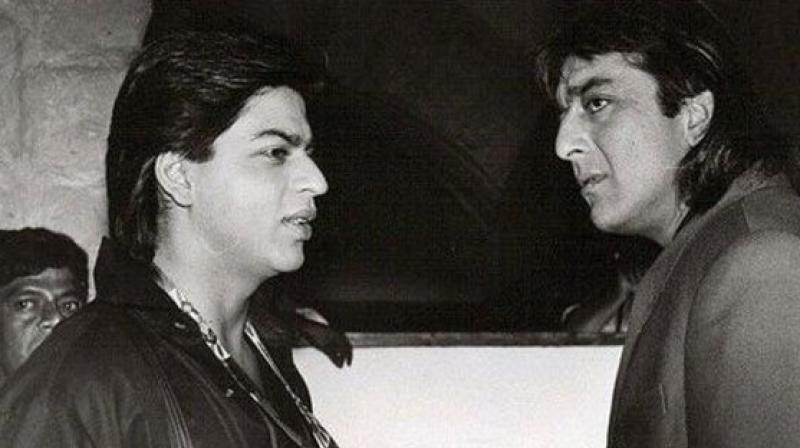 Shah Rukh Khan and Sanjay Dutt many years ago.

Mumbai: Rajkumar Hirani’s ‘Sanju’ has been the talk of the town since the biopic on Sanjay Dutt starring Ranbir Kapoor hit the theatres on Friday.

While on other hand, it has earned laurels for the team, courtesy Ranbir’s brilliant act and broke several records on its way to minting Rs 167 crores in five days, on the other hand, some have accused the director of ‘whitewashing’ the controversial actor’s image.

Be it his arrest and imprisonment for possession of arms during the 1993 Bombay Blasts, addiction to drugs or multiple lovers including actresses, his life was surely among the most sensational ones.

But Hirani’s convenient justification of some of those chapters in his life didn’t go down too well with a section of the viewers.

However, despite the controversies, one of the most striking aspects of Sanju in real life has been his emotional side, relationship with parents and friends, some like Salman Khan, Kumar Gaurav and Paresh Gehlani, who reportedly combined to form Vicky Kaushal’s character in ‘Sanju.’

An example of this side was Ranbir revealing how Sanju had gifted him a Harley Davidson bike during his youth days, and a similar story involving another actor is now going viral.

The actor is Shah Rukh Khan, who revealed on an episode of ‘Kaun Banega Crorepati’ with ‘Munnabhai’ duo Sanjay and Boman Irani, how Sanju expressed support to him during his struggling days.

In the snippet going viral, he is seen saying, “I want to share a small incident with everyone. I neither had any friends and nor knew anybody. And I had fought with someone. And I had nobody to turn to. And I was hoping to be in Delhi, my parents were also not with me. But there was one man, who came me to me in his jeep, that was Sanjay Dutt. And he said, ‘If anyone touches you, you tell me.’ So he is my elder brother.”

We surely need to thank Sanju as we probably would not have got a star like SRK if he had returned home that day.