Is Bollywood no longer afraid of ICC Cricket World Cup?

The question is quite tricky and can be the topic of serious debate. 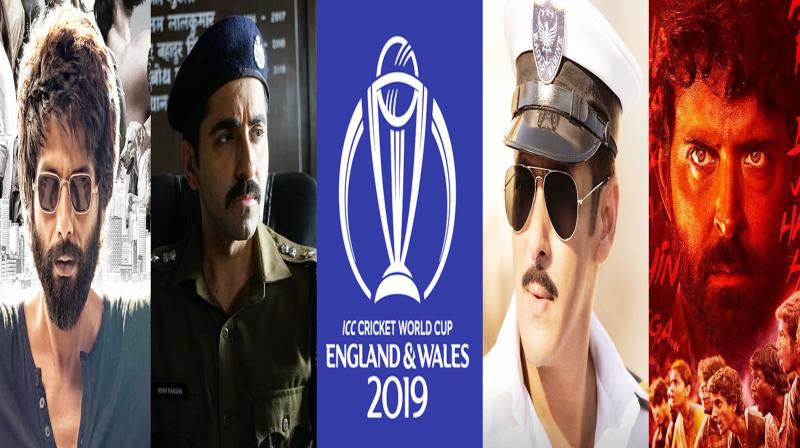 Mumbai: Right now, the entire world is busy showcasing their sports fervour with the ongoing ICC Cricket World Cup 2019. On one side, we have cricket enthusiasts and the other hand Bollywood lovers. Is there any reason why Bollywood film industry can possibly feel threatened to release any blockbuster hit during this period? The question is quite tricky and can be the topic of serious debate. Keeping this is in mind lets delve deeper into what the actual scenario is like.

India is one of the hot favourite teams of ICC Cricket World Cup 2019 and everyone is keeping an eye on Men In Blue's performance in the tournament. Since the last two world cups, the Indian cricket team has always been favourite of all sports lovers. Hence, the craze to watch India's world cup match is on another level. On the other hand, as per past records, Bollywood has witnessed tough time during world cup tournament as many films didn't manage to perform well at the box office.

In 2011, when ICC Cricket World Cup took place in India, Sri Lanka and Bangladesh, films like F.A.L.T.U produced by Vashu Bhagnani, Abhishek Bachchan starrer Game, Priyanka Chopra's 7 Khoon Maaf failed miserably at the box-office. However, Kangana Ranaut and R Madhavan starrer 'Tanu Weds Manu' turned out to be an exception and become a hit at the box-office.

2015 has given relief to Bollywood as big-budget films like Badlapur starring Varun Dhawan, Ayushmann Khurrana and Bhumi Pednekar starrer Dum Laga Ke Haisha and Anushka Sharma produced and starrer NH10 made good business at the box-office.

This time in 2019, Bollywood has many big releases. Salman Khan and Katrina Kaif starrer Bharat is releasing on Eid i.e. on June 5. Notably, on that day, India will be playing its first world cup match against South Africa. Apart from that, Shahid Kapoor starrer Kabir Singh, Ayushmann Khurrana starrer Article 15 and Hrithik Roshan's Super 30 will be releasing during the tournament. After seeing these big budget films' release dates, it seems like Bollywood is no longer scared of Cricket World Cup.

On this topic, Siddharth Bhardwaj, chief marketing officer and the head of enterprise sales, UFO Moviez told, "We feel that both cricket and movies can co-exist. As we witnessed during the IPL season, most of Bollywood, regional as well as Hollywood films did well and clocked huge box office collections. A movie will do well if the content is good, irrespective of the time it is released. What audiences are looking out are good content and entertaining film experience. Given the popularity of the movie star cast, these movies are expected to have a huge opening, but their box office numbers will depend on how good the content is. Besides, ICC world cup is following a different format this year around, which will give audiences a lot more matches of India to watch, which is why we are sure films won’t be affected."

Further predicting about the movies' business during World Cup 2019, Siddharth Bhardwaj said, "Those days are gone, where filmmakers used to push their releases in order to avoid major cricket sporting events. Over the years, we have seen how films have held their own ground, and have done well at the box office.  During World Cup 2015, Badlapur, Dum Lagake Haisha, NH10 etc were released and they managed to earn great numbers at the box office. This year looks promising too as the audiences are keen to watch Bharat, Kabir Singh, Article 15, Super 30 etc. in the theatres."

Among all the films, Article 15 is the film that deals with one of the major issue in Indian society - social discrimination. Therefore, the makers are trying their level best to bring audiences to the theatres through promotions. Speaking about the film releasing during World Cup, Article 15 actor Ayushmann Khurrana said, "I think both the mediums are very different. I have released my films in the past during IPL as well as the World Cup. They have worked pretty well at the box office. If the content is good then we don't have to worry about the film's box office performance. I feel it's a good release date and audiences would love to get to know about Article 15 in theatres."

Apart from that, many popular multiplexes are organising India's matches' screening at the cinema halls.

Well, it seems like Bollywood is all set to perform despite having craze of cricket amongst the masses. After all, cricket and cinema are different from each other. Each domain has its own following and trade has witnessed the same in the past as well. Nowadays, Bollywood films work only on the basis of content. If the content is good no cinema lover can control himself to experience an essence of the subject in cinema halls.

In the end, entertainment is an important factor for both cricket and cinema. And, one thing that we can't measure is fans' love towards cinema and cricket.