Entertainment   Bollywood  04 May 2018  Watch: Ranveer gets train named after him in Switzerland, celebrates it filmy style
Entertainment, Bollywood

Watch: Ranveer gets train named after him in Switzerland, celebrates it filmy style

Not just inaugurating it in style, the actor had a small performance on top of it in true 'Ranveer Singh' style. 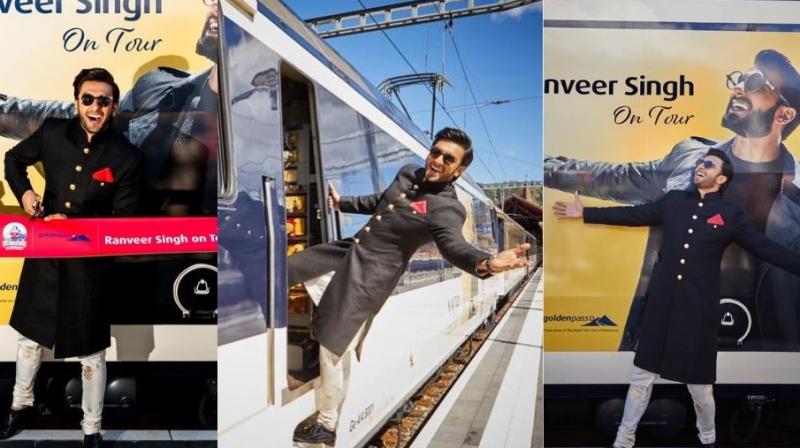 Mumbai: It’s a well-known fact that the craze for Bollywood is not just restricted to India but is spread over various other parts of the world.

And that’s probably why so many countries have roped in Bollywood stars to draw tourists to their country.

Shah Rukh Khan has been an ambassador for Dubai and some of the other partnerships involve Ranveer Singh for Switzerland, Parineeti Chopra for Australia, Sidharth Malhotra for New Zealand, among others.

But none of the countries seem to have done something for their ambassadors what Switzerland has done for Ranveer.

The nation has launched ‘Ranveer on Tour’, a train that you can hop to  enjoy a spectacular experience through the Lake Geneva Region.

Ranveer himself inaugurated the new vehicle, cutting the ribbon and posing with it in style.

The ‘Padmaavat’ star’s joys knew no bounds as later he only got on it and sang the famous ‘Udja Kale Kawan’ song from ‘Gadar’, perfect way to remember his country when abroad.

When you have too much of #switzerland and start missing home. 😂 #ranveersingh #india #home #filmychutzpah

The actor’s recent trip to Switzerland had already been making news, with his performance looking almost exactly like Charlie Chaplin to promote the legend’s museum, being lauded.

The actor’s popularity is well-known, courtesy his becoming the first Non-Khan (along with Shahid Kapoor) to enter the Rs 300-crore club with ‘Padmaavat’ recently, and there’s no doubt there’d be a good number queuing up to experience this ‘Ranveer’ journey.