Twitter went on an overdrive on Sunday after the leak, with the hashtag '2Point0' trending in the morning. 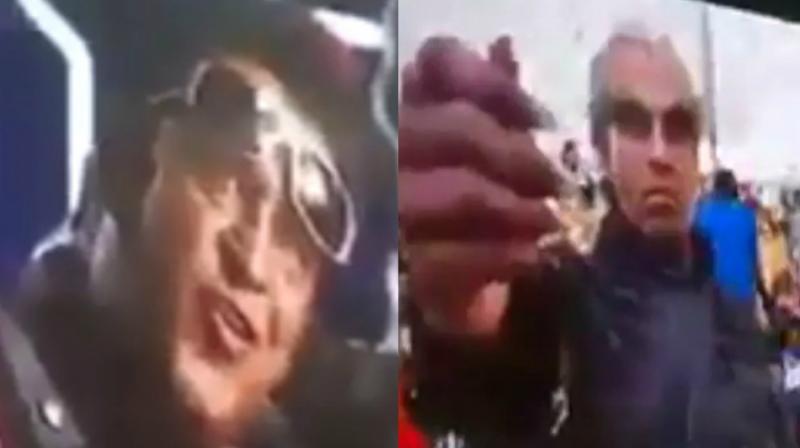 Screengrabs from the leaked teaser of '2.0.'

Mumbai: Rajinikanth made his fans go gaga over him on Friday with the teaser release of ‘Kaala’ which was filled with everything trademark Rajinikanth.

Two days later, another film starring the megastar, with a lot more at stake, ‘2.0’s teaser was also released on social media, albeit it was leaked.

Twitter went on an overdrive on Sunday after the leak, with the hashtag '2Point0' trending in the morning.

The one-and-a-half-minute video is shot of the screening of the Tamil teaser on a big screen outdoors and is hence blurry, but there’s no doubt that there’s something grand in store for the fans.

There’s no doubt a heavy use of VFX, as phones fly off people’s hands and off the shelves, creating a storm.

Vaseegaran, played by Rajinikanth, and his team face a massive problem and his other version Chitti is back, accompanied by another robot Amy Jackson.

Akshay Kumar, who reportedly plays a ‘Crow Man’ in the film, is seen briefly as he stylishly sets off a bomb towards the end and a massive crow is also seen spelling trouble for the people.

Be it his heavy-duty weapons or his massive battalion or action sequences, Chitti is the one to look out for this time as well.

His funny expression in the last scene of the teaser, gives us a hint that he could turn out to a mean ‘guy’ again.

There’s also Nasser and Sudhanshu Pandey spotted in the teaser.

2.0’, directed by Shankar, was earlier scheduled to release on Diwali 2017, then took on release dates like Republic Day, a week in April, but now reports suggest it’d be releasing on either Independence Day or Diwali.