The actor and the director were no takers for the actress' peach lehenga with maang tika, nath and jhumka look. 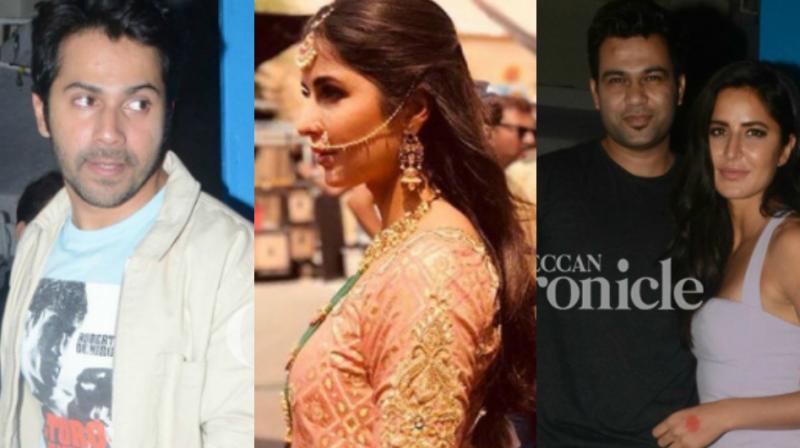 Mumbai: Aanand L Rai’s  ‘Zero’ has acquired added significance after it unintentionally turned out to be the last film featuring legendary actress Sridevi, who passed away in Dubai on February 24.

While the late actress only has a cameo in the film, the star cast is led by Shah Rukh Khan, Anushka Sharma and Katrina Kaif.

The shoot of the dwarf drama is currently underway in Mumbai and on Friday, Shah Rukh shared a lovely picture with his director and his ‘media manager’ Katrina, where he called them 'scintillating & exciting’, but posed with his eyes closed as they had 'erred' in calling him for the early morning shoot of the film.

And a day later, Katrina revealed her look from the movie in a lovely Instagram picture from the shoot in Film City, Mumbai.

The actress looks stunning in a peach lehenga with maang tika, nath and jhumkas in the picture with the technicians working behind her.

Varun Dhawan, however, didn’t seem pleased and instead of praising her, praised the wall behind, calling it amazing.

It’s possible that it could be an internal joke they share as Katrina also expressed her amusement.

Ali Abbas Zafar , ‘Tiger Zinda Hai’ director and a very close friend of Katrina, also ignored her look and carried on his 'director' role asking her to face the camera.

We wonder if they found  it hard to spot the actress' beauty, but we do hope that when the film hits the theatres on December 21, they’ll be mesmerised by her