The SS Rajamouli directorial got mentioned second on Rotten Tomatoes' ‘Best Movies Off the Radar 2017’. 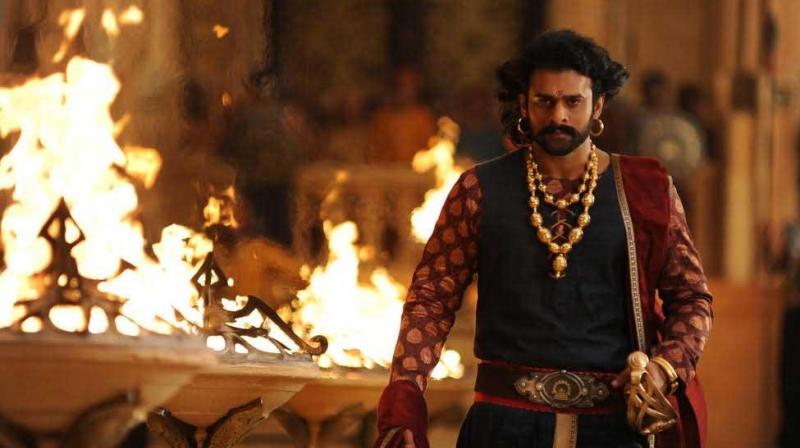 Prabhas in a still from 'Baahubali: The Conclusion.'

Mumbai: 'Tiger Zinda Hai' is inching closer to Rs 300 crores mark at the box office and has been declared a blockbuster, so you can imagine how much of a blockbuster 'Baahubali: the Conclusion' has been, considering it earned more than Rs 500 crores with just its Hindi version.

The magnum opus made it to almost every year-ender list possible, for the success and for all those associated with the film.

The Prabhas starrer was the most trending Entertainment hashtag of the year on Twitter, second on global ratings website IMDB’s Top Indian films of the year, with three of the film’s actors also making it to Top Indian actors list.

And now the film has made it another global ratings platform's list, and this time it was the only Indian project mentioned alongside international movies.

‘Baahubali’ got mentioned second on Rotten Tomatoes' ‘Best Movies Off the Radar 2017’.

Along with their mention, the website wrote, “Baahubali 2: The Conclusion plays like a shotgun wedding between Ben Hur and Kung Fu Hustle, seasoned with bits of Shakespeare, Kurosawa, and Buster Keaton. In other words, it’s a blockbuster that’s both gigantic and lighter than air. The story of The Beginning was as simple as a fairy tale and as resonant as a myth, but with The Conclusion, director S.S. Rajamouli has cranked everything to 11; rarely have action sequences this gravity- (and logic-) defying been captured on film. What separates this epic (which was a massive hit in India and within the South Asian diaspora) from its American brethren is its sincerity and optimism: its righteous titular hero (played by Prabhas) and his band of honorable men and women clash with scheming, corrupt bad guys, and it feels alternately old-fashioned and refreshingly bold. It’s the kind of film that reminds us why we love going to the movies.”

The film also scored 100 per cent on the Tomatometer, a measure of the reviews coming in for the film and 87 per cent Audience Score, an analysis of how many people rated it more than 3.5.

Dancers performing to a ‘Baahubali’ track at an NBA game few weeks ago was just an indication of how much the film has been popular, but this mention definitely proves that its impact has been truly global.