Story of Prabhas’ Baahubali, ‘before the beginning’ announced, Rajamouli opens up

The film ,which set box office records and created buzz as seen never before, gets a prequel on Netflix. 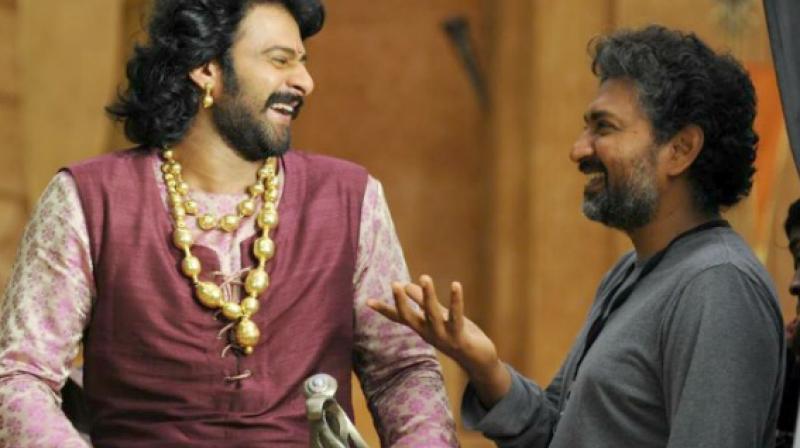 Prabhas and SS Rajamouli on the sets of ‘Baahubali.’

Mumbai: Fans of ‘Baahubali’ can revisit the world of Mahishmati in a new Netflix series that will explore the journey of Sivagami in a prequel to the SS Rajamouli's two-part blockbuster.

The series, which was announced by Netflix on Thursday , has already been given a two-season order.

Season one of the series will have nine episodes and captures Sivagami's journey from a rebellious and vengeful girl to a wise and unequalled queen.

Netflix has teamed up with the team behind ‘Baahubali’, including Arka Media Works and Rajamouli. Deva Katta and Praveen Sataru will co-direct the series.

Rajamouli is looking forward to the prequel.

“I am very excited that this is being adapted as a Netflix Original Series. With Netflix as our partner, we have the opportunity to create a rich and riveting series and take this quintessential Indian epic to the world, which is very gratifying to me as a storyteller,” he said in a statement.

According to a synopsis provided by the streaming giant, ‘Power, politics and intrigue find themselves juxtaposed against the rise of Mahishmati - from being a city-state to an empire.’

Rajamouli said the world of ‘Baahubali’ is extensive and immersive with strong characters and larger than life kingdoms and while they explored a part of it in the two films, there are other more dramatic stories to explore.

Erik Barmack, VP, International Originals, Netflix, said, “Baahubali is a world-class franchise that epitomizes the power of compelling stories that resonate globally. We are excited to work with some of the world's most talented writers and producers on one of India's most beloved stories. The series is a tremendous opportunity for us to give audiences more of the universe that they have come to love, and welcome millions more into the global Baahubali fandom.”

Prasad Devineni, Producer, Arka Media Works, said that they have been working for over a year to develop the prequel as a Netflix original series.

"We are happy to be partnering with Netflix to produce this amazing story. This partnership gives us the reach and the creative freedom to bring to life the full potential of the series in all its grandeur and exceed the high expectations set by both our films," he added.

With the success of ‘Sacred Games’, Netflix's first original series from India, the streaming service is actively looking to expand its base in the country with original content.

It recently announced a collaboration with Shah Rukh Khan for a spy drama ‘The Bard of Blood’, starring Emraan Hashmi. It is an adaptation of Bilal Siddiqi's book of the same name.

Tags: baahubali: before the beginning