Seal it with a kiss: Virat-Anushka, Ranveer-Deepika’s loved-up moments are adorable

It was a loved-up day for celebrity couples on Thursday, as they showed affection to their partners publicly. 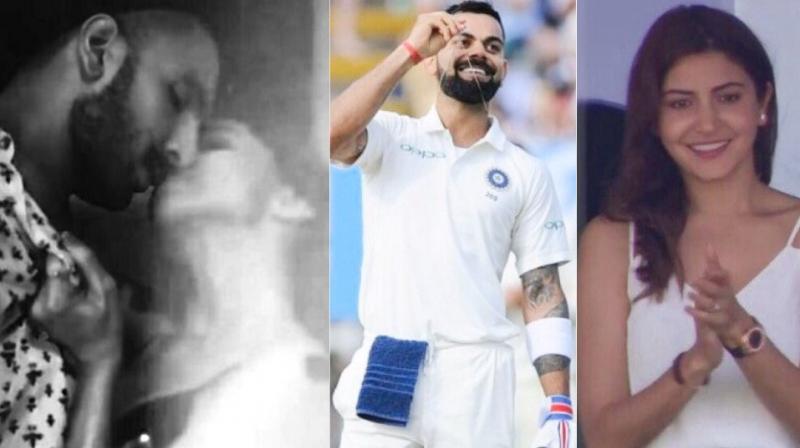 Mumbai: It was a loved-up day for celebrity couples on Thursday, as they showed affection to their partners publicly.

The first couple to do so were Virat Kohli and Anushka Sharma.

The pair was not spotted together, yet there was so much by way of expressions that you could clearly feel love they share.

Virat as sole warrior brought up one of the best hundreds of his career in Birmingham, scoring 149 runs in the first test against the England.

And the passionate cricketer was truly ecstatic, and as the ball reached the boundary, took out his chain and kissed his wedding ring which serves as a locket too.

As if to dedicate the hundred to Anushka, Virat completed the celebration by raising his bat towards her and giving her a flying kiss with it.

The actress stayed true to her reserved nature like always, only clapping to congratulate her hubby, and not quite reciprocating the gesture, but we are sure she’d be beaming with pride.

This is not the first time the captain has done so, but it is adorable always.

The next couple, which also shared some lovely moments, were, however, present together.

With reportedly just three months to go for their wedding, Deepika Padukone and Ranveer Singh are not shying away from PDA anymore.

After a video of them walking hand-in-hand at Disneyland, USA went viral on Wednesday, the couple did the same after returning to Mumbai on Thursday.

Deepika and Ranveer held their hands tightly and walked from the airport to their car.

Ranveer, like a true gentleman, escorted his ladylove into her car and though not exactly very publicly, kissed her before separating and moving into his car.

The two couple’s gestures show that it’s not just the new couples, read Priyanka Chopra-Nick Jonas, Ranbir Kapoor-Alia Bhatt, but even the ones who’ve been strong for years, who can give us couple goals.