Ranbir Kapoor, Rajkumar Hirani and team ‘Sanju’ is on cloud 9 because it has crossed the 145 crore mark. 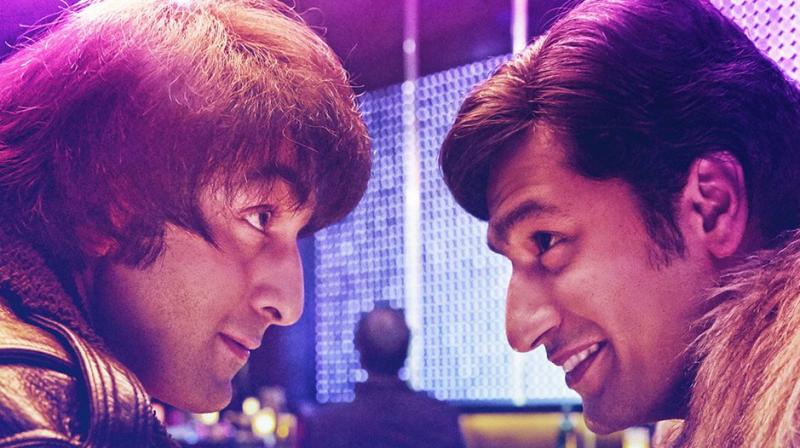 Ranbir Kapoor, Rajkumar Hirani and team ‘Sanju’ is on cloud 9 for a very special reason – their movie has crossed the 145 crore mark.

While everybody right from Ranbir to Dia Mirza to even Karishma Tanna were spotted at the celebrations, one of the main men, Vicky Kaushal was missing in action.

Vicky has actually begun shooting for his film Uri in Serbia, which is why he connected with the team on a video call.

His and Ranbir’s chemistry even here is totally unmissable, especially that portion where Vicky gives him kisses from the phone.

I love their bonding 😍❤🎀 #Repost @vickykaushal09(@repost_via_instant)I’m miles away, but they made sure I be a part of the celebration. Team Sanju you all are just too special. Love you all and miss you all so much. And RK meri jaan, my brother, I love you too, you are such a gem! @hirani.rajkumar Sir I feel so lucky to have worked with you. Thank You @diamirzaofficial for capturing this, you have my heart. @shaunagautam @ekalakhani @collindcunha and everybody in the team, Hugs and kisses! #aboutlastnight #successparty #vickykaushal Sanju❤️❤️❤️ @neetu54 @riddhimakapoorsahniofficial

🍻 To the best team ever at the #Sanju success bash pic.twitter.com/bdXQ9R70ZD