The nail-biting twists and turns are sure to keep you glued to your seats. 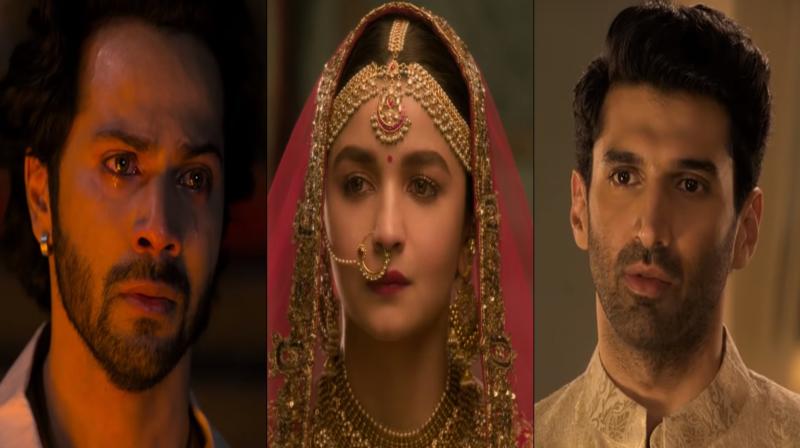 New Delhi: The trailer of Karan Johar’s much-awaited film 'Kalank' is finally out, and it deals with an unusual love triangle and an undying quest for love.

The two-minute-long trailer, which takes us back to the monumental era of the 1940s, was shared by Varun Dhawan on his Twitter handle on Wednesday, thus putting an end to his fans' weeks of anticipation.  “Yeh mohabbat ki dastaan dekhi nahi, mehsoos ki jaayegi. #KalankTrailer out now,” Varun wrote along with the video.

The trailer shows the love triangle between Varun Dhawan, Alia Bhatt, and Aditya Roy Kapur. Alia's character marries Aditya, who is already married to Sonakshi Sinha. However, Alia develops a bond with Varun too.

By the end of the trailer, Alia and Varun get separated as she, along with Aditya Roy Kapur, is seen on a train as fire engulfs the background. The nail-biting twists and turns are sure to keep you glued to your seats.

The trailer also shows a glimpse of KunalKhemu, KritiSanon, MadhuriDixitNene, and SanjayDutt. Helmed by Abhishek Verman, 'Kalank' is all set to hit the screens on April 17 this year.