An actor and a designer

Kareena and Manish, who had met in 1990 and have been friends since, spoke to us about their first collaboration. 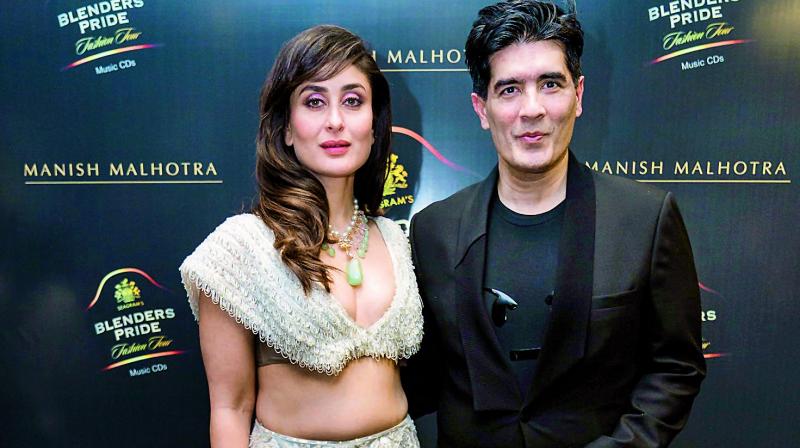 We speak to ace fashion designer Manish Malhotra and his favourite muse Kareena Kapoor Khan, who enthralled the audience at the 15th edition of the Blenders Pride Fashion Tour.

The 15th edition of the Blenders Pride Fashion Tour aims at creating a dramatic new vision and innovation in fashion with some of India’s best fashion designers. At the Hyderabad leg of the tour, Bollywood actress Kareena Kapoor, who collaborated with her friend and ace designer Manish Malhotra, regaled the crowds.

Kareena and Manish, who had met in 1990 and have been friends since, spoke to us about their first collaboration. Says Kareena, “Manish and I always had a great association, and I am happy and proud to be walking for him.”

Manish, who dressed Kareena in many movies including Jab We Met, Chameli, Kabhie Khushi Kabhie Gham, returned her warmth, stating that the coming together of the duo for this tour was iconic. Manish’s collection was a ‘summer wedding’ special with a lot of intricate thread work, sequins, lace, trails, experimental menswear, in sorbet colours. “But the most important thing in this collection is that there is a certain sense of individuality and owning up of what you do and what you like,” shares Manish.

The year of introspection
The year 2020 is a milestone for both Manish and Kareena in many ways. For Manish, who has been in costume designing for 30 years, the Blenders Pride Fashion Tour and his label turn 15 years old this year. For Kareena, on the other hand, 2020 marks the 20 year in the industry, having already acted in 60 films.

While Kareena takes pride in being a working mother, wife and an independent woman, for Manish, who is working with fourth-generation actors, the pride is in being self-taught and in a unique position in the Indian fashion world. “It feels nice to be the only designer who comes from costume designing to make it this big,” says Manish, who claims to have entered movies for the love of the medium and the range of colours it afforded. “I wanted to change the perception about costume designing — revolutionise the entire segment. I didn’t know, however, that one day I’ll have my own label and boutiques around the world. Or that the universe would bless so I work with the tops stars and then with their kids.”

Manish remembers being present as both Karisma and Kareena gave their first shots in the movies.

What the future holds
One would remember Manish as the man who made the Indian day-to-day wear — denim jacket over a kurti, or a T-shirt over a salwar — ‘cool’ with Kareena’s Jab We Met. “The film changed the way the tiers two and three cities in India look at Indian fashion,” he points out.

On her part, Kareena, who is currently working on Laal Singh Chaddha with Aamir Khan and will get started on Karan Johar’s Takht, relives her days in Hyderabad, where she had repeatedly stayed during her sister Karisma’s early film years.

“I’ve also shot a lot here in my early days, and it always feels great to be back in this clean city. The roads are great here and it feels nice to drive around — quite the pleasant change from Mumbai,” shares the actress with a chuckle.