Shah Rukh came outside for a few minutes to thank his enthusiastic fans and greeted them with folded hands. 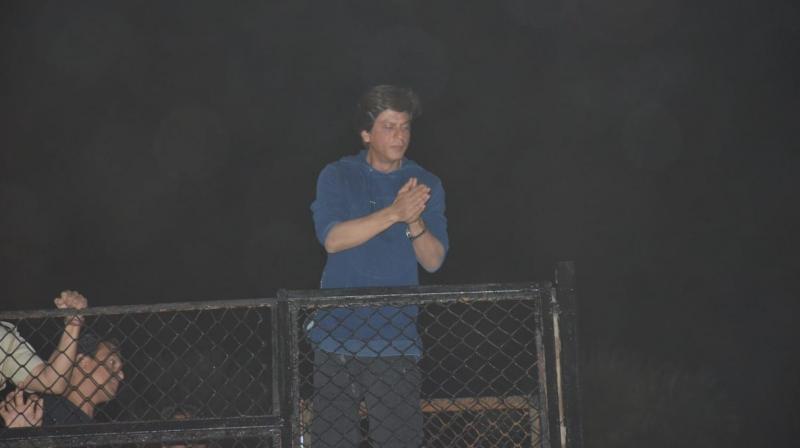 Mumbai: Bollywood superstar Shah Rukh Khan who turned 53 on Friday, greeted thousands of his fans outside his residence at midnight and thanked them for their wishes.

"We have been waiting here since a long time to get a glimpse of Shah Rukh. He is my favourite superstar," said one of the fans, who via different antics wished Shah Rukh outside Mannat here.

Shah Rukh came outside for a few minutes to thank his enthusiastic fans and greeted them with folded hands.

Looking at the situation, security was beefed up well in advance outside Shah Rukh's residence.

Meanwhile, the 'Badshaah' of Bollywood will be releasing the much-anticipated trailer of his upcoming movie 'Zero' later today.

The trailer will be released at a grand event which will be attended by SRK and the leading ladies of the film – Anushka Sharma and Katrina Kaif. The makers of the film have planned on taking the event a notch higher by recreating Meerut city and establishing Ghanta Ghar along with the colourful mela-like set up which will feature food joints and game stalls.

In the film, SRK plays the role of a vertically challenged man who falls in love with a superstar, played by Katrina, while Anushka will also play a pivotal character.