Neither Salman nor Shah Rukh, not even the Big B can match the body of Aamir’s work in the last decade and half. 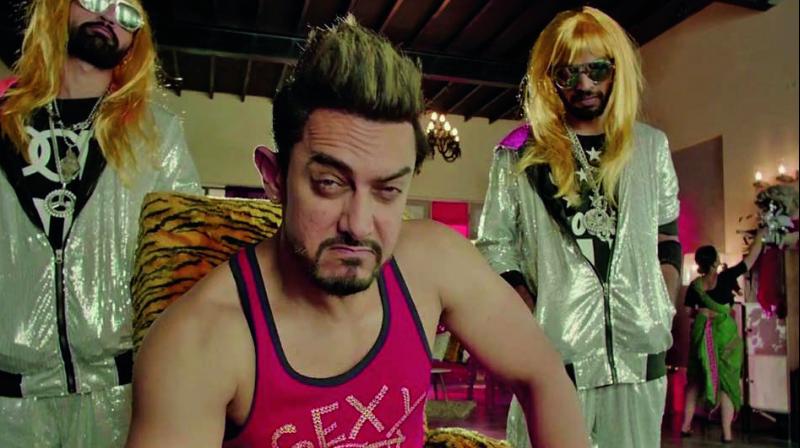 Till 1990s, there was a clear divide between the parallel (realistic) cinema and the mainstream (commercial) cinema in Bollywood. While films of the parallel cinema won National Awards for their directors and actors, they didn’t add to the bank balance of the producers. On the other hand, mainstream films drew blank at the National Awards but earned a lot of mullahs for the producers!

Some films of Hrikesh Mukherjee, Basu Chatterjee and Shyam Benegal were exceptions; they offered clean, meaningful and wholesome entertainment with distinct social messages and also managed a decent run at the box office.

In the last 15 years, Aamir Khan has, through his films, totally erased that distinction; he has produced a string of films having high production quality of mainstream films, a believable narrative and a strong message like the parallel cinema conveyed earlier. No wonder these films not only received critical acclaim in India and abroad but also tasted huge commercial success; his last film Dangal grossed over `700 crores in China alone.

Mangal Pandey, Rang De Basanti, Lagaan, Taare Zameen Par, 3 Idiots, PK, Dangal and the latest Secret Superstar have become the milestones of Hindi filmdom and established Aamir as the most dependable and saleable producer and actor of Hindi films. Neither Salman nor Shah Rukh, not even the Big B can match the body of Aamir’s work in the last decade and half.

When P.V. Sindhu was fighting for Gold medal at the Rio Olympics everyone, irrespective of race, religion, caste, language and region, was praying for her victory. Similarly, while watching Geeta, in Dangal, wrestle for the Gold, all the spectators in the cinema hall hold their breath and pray for her victory. When the coach locks up her father Mahavir Phogat (played by Aamir) in a room while his daughter is fighting for the medal, we feel the pain of his helplessness, and wish for the door to open so that Geeta’s father could rush out to see the wrestling match. This is the hallmark of a great film; it overwhelms its viewers, makes them so emotionally connected to the characters on the screen that their pain, sorrow, anguish, trauma as well as joy and elation are felt equally by them; the viewers seem to swim and sink with the happenings in the life of characters in the film.

And this is what I experienced while watching Secret Superstar. It isn’t just a film; it’s a sharp, shocking, heart-wrenching slice of life in a lower middle class Muslim family. It moves its viewers beyond words, beyond tears! The tradition-bound, conservative, stern, engineer unleashes terror as the father and the husband. When he throws away the thali with food just because the salt content in dal is less and when he takes his wife Najma (Meher Vij) inside the room, leaving the daughter and the little son outside, and beats her mercilessly, one is filled with rage, and a strong urge to stop that man. Our heart goes out for that little kid who peeks through the door and helplessly watches his mother being beaten.

There are several such traumatising scenes that shake a viewer’s sensibilities, and forces one to wonder how unkind and heartless can a father be; the scene where he breaks the strings of the guitar knowing fully well that his daughter loves playing it, the one where he forces his daughter to throw away the laptop which means a world to her and which her mother had bought for her after selling her necklace.

Many upper middle class families in big cities wherein even a 10-year-old girl owns a smartphone may find the narrative difficult to swallow. But this is a reality too. The story of this film is as real as the reality of honour killing and female foeticide. This is the ugly face of our incredible India!

This little gem of a film touches many human relationships in a very subtle way. The meek, timid-looking mother whom her daughter often calls “stupid” nurses the desire to help her daughter fulfil her dream of becoming a famous singer against the wishes of her husband who wants to get his daughter married to someone in Saudi Arabia. Even while the mother beseeches her daughter to stop dreaming of becoming a singer, deep down in her heart she wishes for her daughter’s dreams to come to fruition. These tender, seemingly conflicting feelings are exemplified beautifully in the airport scene when the mother refuses to go to Saudi Arabia and runs out of the airport with Insiya. The tender love the brother has for his sister too is shown through small little scenes like the one wherein the little boy is trying hard to join the broken pieces of the laptop with a brown tape!

Aamir’s act as eccentric, foul-mouthed Shakti Kumar, with tough and pompous facade but a soft and caring heart is a master stroke. His comic timing, his body language and his facial expressions are hilarious; every time he appears on it, he lights up the screen. His hairdo and outfit takes one back to Robert De Niro’s Taxi Driver of 1970s.

Zaira Wasim is a bundle of talent. Unlike in Dangal where she had to show her wrestling prowess, in this film she has to express herself emotionally, and that she has done perfectly. She has portrayed the vulnerable, tender, caring, rebellious and aspirational girl of today to perfection. She has ably represented the young girl of today who wants to touch the sky against all odds.

Secret Superstar is a reminder that there can be an entertaining humour worth enjoying with the whole family other than the one offered by films like Golmaal and Hera Pheri.