Tamannaah Bhatia and S S Rajamouli were missing but the other members of the Baahubali team had a ball together. 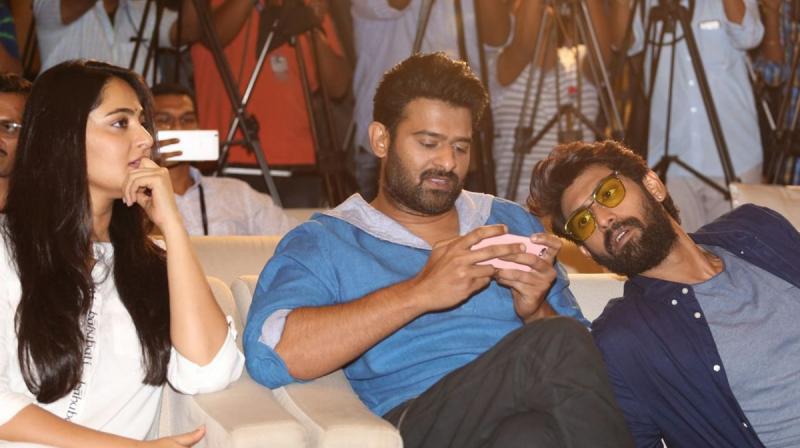 A file photo of Anushka Shetty, Prabhas and Rana Daggubati during the promotions of 'Baahubali: The Conclusion.'

Mumbai: 'Baahubali: The Conclusion' rewrote box office records and it seems that the stars associated with the film won't let fans forget about it that soon.

Even after almost six months since the release and the blockbuster success, the ‘Baahubali’ fever is yet to subside, with the stars associated with the film suddenly being on a reunion spree.

After Prabhas, Rana Daggubati and director S S Rajmouli reunited just few days ago to announce the TV premiere of the film, this time even the leading lady Anushka Shetty also joined in the fun.

The three actors partied 'Hyderabad style', indulged in some delicious Andhra-style delicacies and even celebrated the success of the film with the iconic sword of Baahubali.

They were also joined by Raveena Tandon and her husband Anil Thadani, with the former sharing pictures on Instagram. Not everyone is aware that Thadani’s AA Films had distributed the epic blockbuster.

The couple were also seen holding the ‘Baahubali’ sword along with Prabhas and Anushka.

With #teamBahubali ! Celebrating the sword of #bahubali .a memento to honour the team and continuing success of #bahubali #indiasbiggestmotionpicture

Amid sporadic link-up rumours, seeing Prabhas and Anushka together would also be a delight for fans, some of who wanted them to pair up for ‘Saaho’ and were upset about Shraddha Kapoor being finalised.

Just that Tamannaah Bhatia and S S Rajamouli were missing and their presence would have definitely been the icing on the cake.