Deepika and Ranveer attacked me, claims fan who ‘caught’ them hand-in-hand in USA

The couple ‘lost a fan’ after she claimed Ranveer ‘went off at her’ after Deepika spotted her recording them. 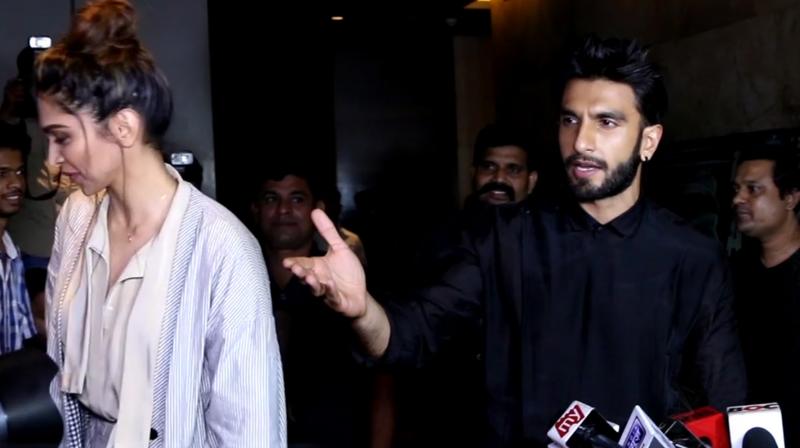 Ranveer Singh and Deepika Padukone were seen in ‘Padmaavat’ earlier this year.

Mumbai: After Ranbir Kapoor and Alia Bhatt hogging the limelight for a considerable amount of time, in the past few days it’s been Priyanka Chopra and Nick Jonas courtesy the actress opting out of Salman Khan starrer ‘Bharat.’

But how can we forget Deepika Padukone and Ranveer Singh then?

The alleged soon-to-be married couple is chilling, away from all the noise in Orlando, USA.

The couple thought they can happily walk hand-in-hand in Disnelyland as they are not in Mumbai away from the paparazzi eyes, but they forgot that USA also has a significant Indian population.

A fan recorded them as they roamed together, but the resultant video got disrupted as Deepika spotted the female fan and walked up to her immediately.

What happened later...take a guess #deepikapadukone and #ranveersingh spend some quality time together as they holiday abroad #instalove #instadaily @manav.manglani

The video ends, and here’s when things have got slightly messy.

As the video went viral on social media, the alleged fan, who goes by the name Zainab Khan, has accused the couple of ‘attacking’ her, and revealed how Ranveer ‘went off’ at her. She slammed the actors by calling them ‘disrespectful' and ‘disgusting’ and how ‘fame got into their head.’

Her comments received mixed reactions on Instagram. Several fans stepped up for their favourite couple, by informing her Deepika wasn’t wrong to tell her to stop, as they have their private lives and that she should’ve respected their privacy.

But there were many who felt their reactions, whatever it was, was unjustified as they felt the actors were not ‘Prince Harry and Meghan Markle’ or ‘Kings and Queens’ and there was no point creating a 'fuss' and 'throwing tantrums' as they were 'publicity-hungry' anyway.

And don’t forget the trolls who had some unpleasant or interesting, however you look at it, comments on Ranveer’s attire, calling him ‘street seller’, choice of clothes ‘horrible’ and terming that as reason for being angry about being shot.

We hope Ranveer and Deepika won’t mind their close ones recording their nuptials as they gear up for their reported wedding on 10 November at Lake Como, Italy.