This unfair bargaining power between writer and producer is perhaps because of no platforms for the writers. 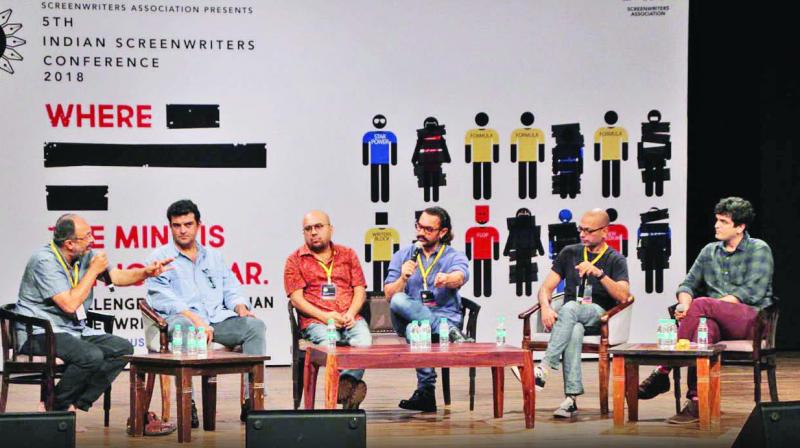 The fifth edition of the Indian Screenwriters Conference (ISA) which began on Wednesday with the theme, ‘where the mind is without fear’, darted towards addressing the challenges Indian screenwriters face today.

Actor Aamir Khan, the chief guest, and Padmashree awardee and journalist Vinod Dua, the keynote speaker, flagged off the event in the presence of 800 writers. The session gained momentum with Aamir and screenwriter Anjum Rajabali posing the question, why aren’t writers getting their dues?

“Very few people understand a good script and every writer feels his is the best script. It could be either of these two reasons why a writer receives disproportionate respect. We need to invest in good script-readers as well as writers,” says Aamir.

Organised every two years by the Screenwriters Association (SWA) — a trade union for film and television writers and lyricists — this three-day event is taking place at the St. Andrews auditorium in Bandra.

The first topic pertinent to the theme was, can writers and producers ever be allies? With a balanced panel of both writers and producers comprising Aamir, Siddharth Roy Kapur, Akshat Verma, Somen Mishra and Amit Masurkar, they mulled over the notion ‘why art and commerce cannot survive together’.

“Screenwriters are the only people that are replaceable in a film. We sign away our rights when we tell the producers, ‘it’s yours.’ Unless and until we are protected legally, it’s going to be this way.” says Akshat Verma writer of Delhi Belly. Echoing Akshat’s sentiments, Aamir underscored the need for the industry to value its writers.

This unfair bargaining power between writer and producer is perhaps because of no platforms for the writers. “As desperate writers coming from humble backgrounds and no contacts, we tend to sell the rights to a producer who may not necessarily believe that we have a say in the entire process of the film,” says Amit Masurkar screenwriter and director of Newton.

But while the discussion hung in favour of the writing cohort, Somen Mishra the screenwriter of Raazi and Talvar, interjected the panel to point out the lack of good writers in the industry. “The average level of writers is pathetic in Bollywood. Before we talk about writers, we must also concentrate on the craft of writing,” emphasises Somen.

The session ended on a high note, with the two factions finding middle ground between the producers’ interest and the writers’ sanctity with the prospect of a Modal Contract. This agreement will decide a minimum wage for writers and protect their rights, without compromising the producers’ interest and investment and will be implemented in most of our future films, assures the panel.

Moving forward, the second half of the conference dived into the topic of the blurred lines between history, mythology and fantasy and the question of where do we draw the Lakshman rekha?

“You can mix mythology, fantasy and history if you do it well. If that wasn’t the case Kalidas wouldn’t write Shakuntala,” says screenplay writer, art director and costume designer Shama Zaidi.

“I have more problems with the lack of authenticity and style with which they are filmed. People wearing huge mukuts (crowns) for so many years, where was there brass 2000 years ago?” asks Shama.

Countering her argument Dr. Bodhisattva, who’s the head of research for TV serial Chandra Nandini says, “We are only retelling history. How can we fight audience perceptions and unsee things which have been accounted in religious texts?”

The topic progressed to the larger issue of commerciality preceding content and the question of how ethical is it for a writer to take liberties with rewriting history.

The discussion grew heated as it progressed towards the looming patriarchy which our mythology and epics are replete with. Moderator Kavita Kane posed the question, “Do we have the courage to show stories where a Shakuntala, Draupadi or Ahilya break from patriarchy?”. Shama was quick to answer, “In books maybe, but not on the screen, television is controlled by men.”

The discussion ended with writer C.L Saini propagating, “There are many versions of the same story, but if we must tamper with history, we must do so responsibly. It must not be misleading.”

The third part of the session titled “Between the hits” looked at the challenges faced by regional writers.

“While Sairat has become the face of Marathi cinema, what about the others that are made and never get a release,” asks Ketki Pandit playwright and HOD at FTII’s screenplay writing department.

“Very few people understand a good script and every writer feels his is the best script. We need to invest in good script-readers as well as writers”