Entertainment   Bollywood  02 Jul 2018  Is Arjun Kapoor getting married soon? His response will surprise and overwhelm you
Entertainment, Bollywood

Is Arjun Kapoor getting married soon? His response will surprise and overwhelm you

Arjun will be next seen in 'Namastey England', 'Sandeep Aur Pinky Faraar', 'India's Most Wanted' and 'Panipat'. 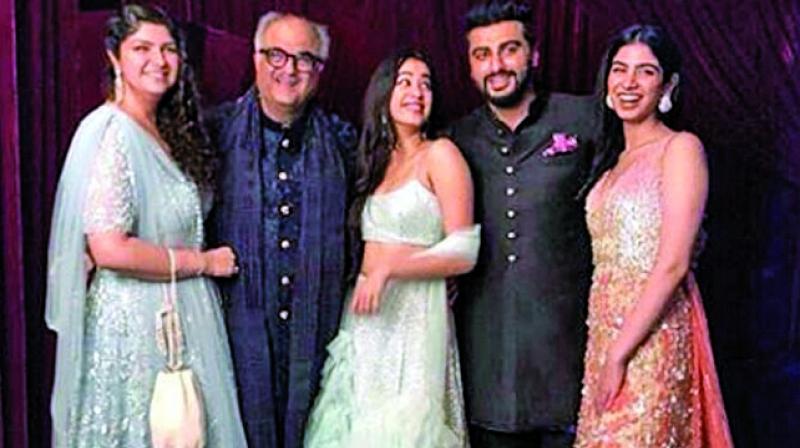 The picture in question features Arjun Kapoor and Anshula along with their father Boney Kapoor, and more importantly, Janhvi and Khushi Kapoor — Sridevi’s daughters.

Mumbai: Arjun Kapoor's grandmother Nirmal Kapoor may have given him a "threat and request" to tie the knot soon, but the actor says he has no plans to get married in near future.

Arjun, who turned 33 on June 26, received a message from his grandmother on his birthday. He posted the picture of the same on his social media accounts.

When quizzed about his wedding plans at NBT Utsav last night, the actor said, "I believe in the institution of marriage. I will share the news with you all when it happens."

Arjun added that he wants his sisters to get married first.

"Recently, there were two marriages in the family. Let my sister Anshula get married, then there is Rhea and Janhvi and Khushi. There is time for me," he added.

The actor, who was honoured with the entertainer of the year award at the event, is now looking forward to the release of his half-sister Janhvi's acting debut 'Dhadak'.

The film, directed by Shashank Khaitan and produced by Karan Johar, also marks the Bollywood debut of Ishaan Khatter.

"The kind of love Janhvi has got from the trailer of 'Dhadak', hope that continues after the release of the film. She is someone who is passionate and wants to entertain the audience through her work. She wants to do good work. I hope she outdoes the expectations that has been bestowed on her from 'Dhadak'," he said.

Arjun is happy that both Janhvi and Ishaan are getting good response from the audience after the release of the film's trailer.

"People are liking the texture of the film and the credit should go first to the makers. They are two well brought up kids and when you are well brought you can see the kind of upbringing you have had from the way you conduct yourself in front of everyone. He is very energetic and talented boy," he said.

On the work front, Arjun will be next seen in 'Namastey England', 'Sandeep Aur Pinky Faraar'. He is also working on 'India's Most Wanted' and 'Panipat'.