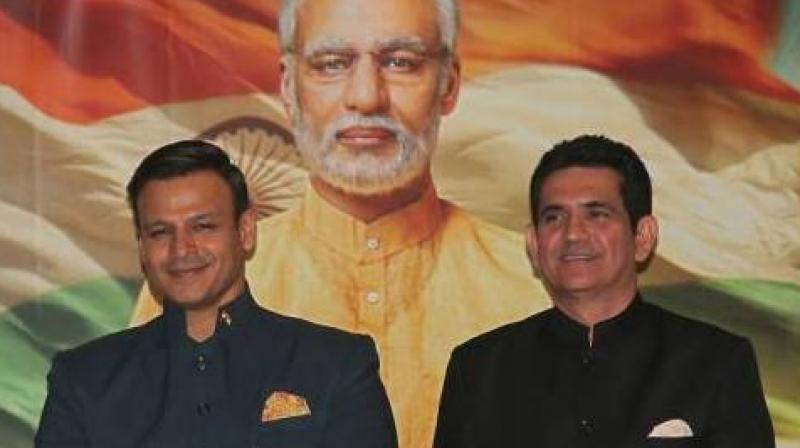 Vivek Oberoi and director Omung Kumar at the poster launch of the film.

Mumbai: In a major relief to the makers of 'PM Narendra Modi' biopic, the Bombay High Court on Monday disposed of the public interest litigation (PIL) filed to stay the film's release.

The petitioner lawyer Tausif Sheikh told ANI: "We had filed a PIL against 'PM Narendra Modi.' In our PIL we have made 10 respondents, first is Ministry of Information and Broadcasting, Censor Board of India, Election Commission of India and all the producers and actor of the film."

"Accordingly, everyone appeared before the court and the Censor Board of India said that they have not certified the film yet. So the question of releasing it on April 5 doesn't arise," he said.

Sheikh said: "The producers appeared before the court and the court has disposed of the matter. EC was authorised by the court to take the decision. Observing that the EC has already initiated proceedings, the petition came to be disposed of."

Vivek Oberoi, who essays the role of Prime Minister Narendra Modi in the biopic, visited Siddhivinayak Temple ahead of the film's release.

"Our film 'PM Narendra Modi' is about to release. So we have come here to take the blessings of Lord Ganesha. This is a place where all the wishes come true. So we are hoping for the same."

Commenting on the recent judgment, he said, "The court's judgment is also a blessing of Lord Ganesha."

The film's producer Sandip Ssingh also expressed his happiness and said, "I am really grateful that the law has done to justice to our film and hopefully the film will release very soon."

The court noted that the Election Commission (EC) has already issued a notice to the makers of the film 'PM Narendra Modi' over allegations of breach of the Model Code of Conduct in view of the Lok Sabha elections.

The Court disposed of a PIL filed by Satish Gaikwad, a resident of Pune, who said the film if it is permitted to be released for public viewing, would violate the Model Code of Conduct imposed by the EC.

The plea also questioned the timing of the film's release and claimed that if released, it was likely to earn Prime Minister Modi electoral mileage.

The petitioner also demanded that the trailer of the film should either be removed or deleted from all social media sites.

"We have conveyed the urgency in front of the Chief Justice that the film would be released on April 5. EC's standing counsel is of the view that we have not got the notice up till now," the petitioner had said.

The EC, however, told the court that it had already sought replies from the makers.

The Central Board of Film Certification (CBFC) told the court, through its lawyer Advait Sethna, that it had already granted requisite certificates for the trailer on March 20.

He also stated that the film is scheduled to be examined for certification this Wednesday and would be cleared for release if it meets all the necessary criteria.

The National Students' Union of India, the Congress party's student wing unit of Goa, on March 15 had urged the Election Commission to ban the release of the biopic, alleging that the movie was a "propaganda by the BJP to influence" voters during the Lok Sabha elections.

The biopic came under the scanner of the ECI after Congress and Left parties complained to the electoral body saying that it violates the Model Code of Conduct.

The film depicts the journey of Modi from his humble beginnings to his years as a chief minister and finally his landmark election as the Prime Minister.