Entertainment   Bollywood  02 Mar 2018  When Sridevi, Kamal hid truth about their relationship for couples compared to them
Entertainment, Bollywood

When Sridevi, Kamal hid truth about their relationship for couples compared to them

Haasan says he can reveal the story now as he does not stand the risk of his 'market' getting affected now. 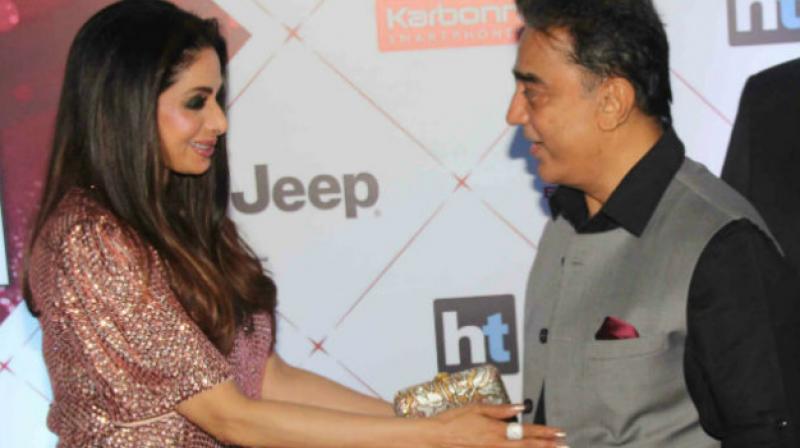 Sridevi and Kamal Haasan recently had a reunion at an awards show in Mumbai.

Chennai: They may have been one of the most romantic pairs on screen, but Kamal Haasan and late female superstar Sridevi shared a bond like that of siblings.

"Sridevi en thangachi (Sridevi was my younger sister)," Haasan said, decades after he was paired opposite Sridevi in a number of Tamil films such as 'Guru', 'Varumayin Niram Sivappu', 'Vaazhve Maayam' and 'Moondram Pirai', the last one being also remade as Hindi classic 'Sadma' in 1983.

Sridevi, who died of accidental drowning in her hotel bathtub in Dubai last week, captured millions of hearts across India as a Bollywood diva. She had started her career in the Tamil cinema industry, besides doing some Telugu films.

She later moved to Mumbai to enjoy a successful career in Hindi cinema.

Writing in the concluding part of his weekly series in Tamil magazine Ananda Vikatan, Haasan, now a politician, said he was revealing the nature of his bond with the late Sridevi as he does not stand the risk of his "market" getting affected now.

"Those days, couples (at weddings) were compared to us, saying they looked like Kamal and Sridevi. They must have seen us singing duets and hugging. We hid the truth (about the nature of the relationship) so as to not shatter that dream," he said.

Drawing parallels with the children donning the roles of god couples Murugan-Valli or Krishna-Rukmini in plays, Haasan said the boy playing the said roles would often describe the girl as 'thangachi', meaning younger sister.

"Me and Sridevi were like one such annan-thangachi (brother and sister)," he added.

Indicating that people in the industry had a fair idea about this, Haasan said he was asked not to speak about it "since you are being celebrated as a couple."

Haasan said after doing three films together with her, he was in the mindset of "Sridevi again?" for another script, adding that she herself could have shared similar thoughts.

But none consulted the two and "they (apparently the producers and directors) decided "that the two will pair opposite each other," he said, adding, after a point of time, "all heroes desired to act with her."

"If our acting was watched keenly, we would look like siblings. One could find resemblance of myself in her acting," he said.

During the course of their career, Sridevi would often seek Haasan's opinions on her films and would patiently listen to his criticism.

While she did not dub in her voice in her first two Hindi films, she did so in her third project, Haasan recalled.

The deceased actor "became Sridevi by sheer hard work," he said, and pointed out to her commitment.

Expressing sadness over the death of his one-time co-star, he said many senior women actors had called him up and cried following the death of the 54-year-old actor.