‘My films have to stand for something’

The actress also says that she wants to inspire people around her to think and work out of the box. 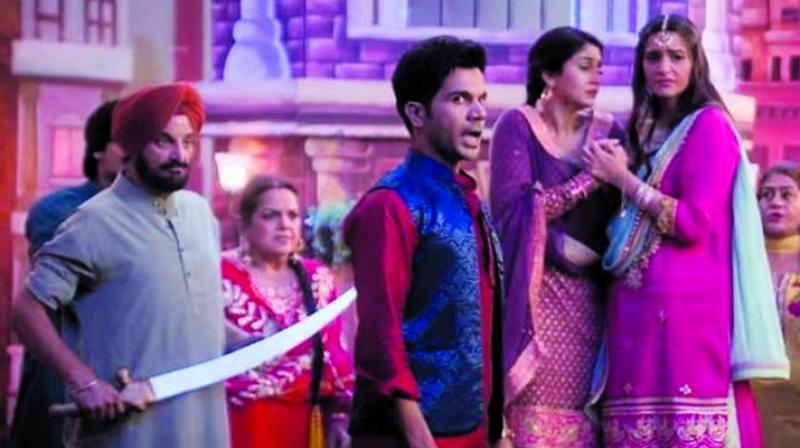 In a critical scene from Ek Ladki Ko Dekha Toh Aisa Laga (ELKDTAL), the film’s lead complains that it would’ve been better if she were 'normal’. This is when her lover responds, saying, “If you can’t accept the way you are, how can you expect others?” This isn’t a conventional conversation but a truism that is the very premise of the film that explores a lesbian relationship — a subject commercial cinema has forever shied away from. Films such as Fire, Dedh Ishqiya, and the more recent Angry Indian Goddesses may have brushed upon the subject, but there has hardly been a commercial film that has managed to sink its teeth into the challenges endured by those in same-sex relationships. For the topic to make its way into the mainstream, it took a bit of star power and for the last few years, Sonam Kapoor Ahuja has been using her onscreen might to shine the spotlight on people and issues that deserve attention. She has been fierce and consistent in her desire to not play it safe and this dedication is reflected in her choice of films. Neerja recalled the brave Pan Am purser Neerja Bhanot while in PadMan, she breathed life into the ambitions of Pari Walia, who educates rural women about menstrual hygiene.

The actress is aware that her star status comes with additional responsibility, for she says, “I have an added responsibility because of the position that I am in. Besides being an actor, being famous and being Anil Kapoor’s daughter, I think I have the responsibility as a person. Also, I am comfortable with taking on such roles. When you are privileged and successful, your responsibility doubles up,” says the Veere Di Wedding actress.

The actress also says that she wants to inspire people around her to think and work out of the box. “It’s important to not just ride the wave, but direct the wave you want so that everybody else can also ride it. I feel it is my responsibility to choose roles that will say something because I have that safety net. My films have to say something and it has to stand for something. There has to be something which will stir up a debate,” says Sonam.

Sonam also takes a moment to praise the director of ELKDTAL, Shelly Chopra Dhar and writer Gazal Dhaliwal, for taking up an unfamiliar subject and exploring it in a relatable way. She says, “The writer of the film is from a small town and it’s made in a very familiar way. It is so innocent and honest that everybody will resonate with it. It is actually not easy to touch upon these subjects but it’s a very clean film and thanks to Shelly who choose to make a film like this.”

The Saawariya actress also says that she is waiting for the day when the LGBTQ community will no longer be weighed down by labels or discrimination and will get the acceptance they rightfully deserve. “I think in general, accepting the LBGTQ community is a little difficult in India. We have a long way to go, but I dream of a world where there are no labels, absolutely no labels; where there is no discussion about it anymore. It should just be normal,” she shares. Harping on her desire for labels to be done away with, she says, “I hope the point, where there are no labels, comes in my lifetime. There should not be labels like ‘gay’ or ‘lesbian’. The person should be looked at as a human being. There shouldn’t be a label and for me, that will be utopia.”

The actress also tells us how she feels about sharing screen space with her dad, since this is the first film that stars both father and daughter. She says, “On the sets, we are like co-stars, at least, I think we are. I have never worked with him in any capacity. I knew he is ridiculously successful for a reason. When I came on sets, I realised his dedication is the reason he is still a huge star today, whereas his contemporaries are nowhere close to what he is doing right now.” Like a true daddy’s girl, Sonam says she is greatly inspired by her father’s focus and humility. She says, “He just happens to be good looking, young looking but he never wanted to be a star. He wants to be an actor and that was his focus. Fifty years from now, I hope I have the same dedication that my father has.”