‘Either you’re a behenji or a sl*t’

I’ve always wanted to do many things in life and I hated when people put me in a box, says Ekta Kapoor. 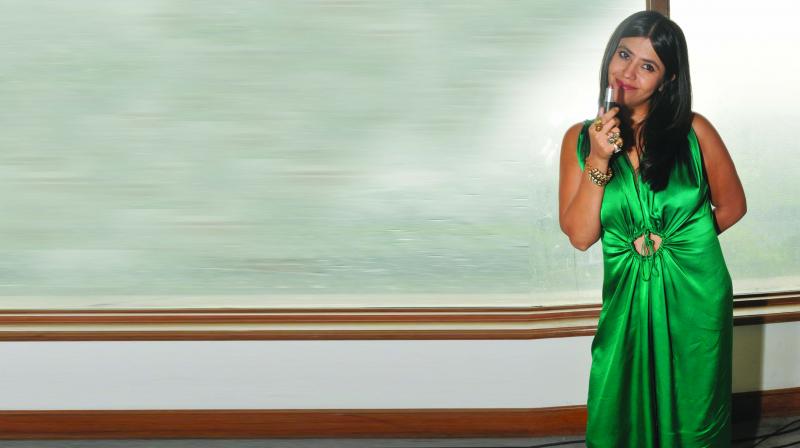 She speaks about drawing inspiration from actor Aamir Khan, Lipstick Under My Burkha finally being released and more in her recent visit to the national capital.

Lipstick Under My Burkha is all set to release and Ekta Kapoor, the presenter and distributor of the film is absolutely excited about the development. “I’m having a blast right now. It is a hardcore and powerful movie and it is so entertaining. When I first saw it, I knew that I had to be a part of it, and have to release it, no matter whatever it takes,” says Ekta, who was in the city recently.

The TV and film producer, who has proudly donned the hat of being the game changer, then be it the idiot box or the 70 mm space, says that this has been possible because she has followed her instincts, irrespective of what the society “categorised” her as.

“I’ve always wanted to do many things in life and I hated when people put me in a box. Women have always been put in boxes. If you do soap operas, you will be called a behenji or if you do edgy entertainer, then you will be called a ‘s**t’. And the reason I’m called a game changer is because I don’t want to be in these boxes which people wanted to put me in,” she says.

She goes on to add, “Many people thought that I was doing Naagin only, I was in fact, also working on films like Udta Punjab and LSD. It’s more like channeling Aamir Khan, who just does what he wants to do. He’s actually my role model. He works with new directors and new co-actors, but he doesn’t have any set benchmarks about anything. He’s neither a macho hero nor is he an art-house hero. People call him 10 names and he’s okay with it. And, I too, want to be that person,” she explains.

Coming back to Alankrita Shrivastava’s Lipstick…, the film which is helmed as one of the most “controversial film of the year”, recently released a second trailer, after a creative poster as an answer to the Central Board of Film Certification.

Says Ekta, “We changed the way the promo was perceived earlier. Now more and more women want to watch the movie and that’s the way we want to increase the reach of the film,” and adds, “Women have always been put on a pedestal like a devi. This kills the real woman inside them completely. All of us have at one point of time combated this attitude. I wear a tika and too many rings in my hand and people think of me as some kind of a freak. I just want to say that let us live. Now when anyone asks about my rings, I say I wear them so that so that I can box you with it (laughs).”