Too detached from reality to care?

With Bollywood celebs going all out with workout videos, it’s debatable whether it’s a way to connect with fans or being self-indulgent 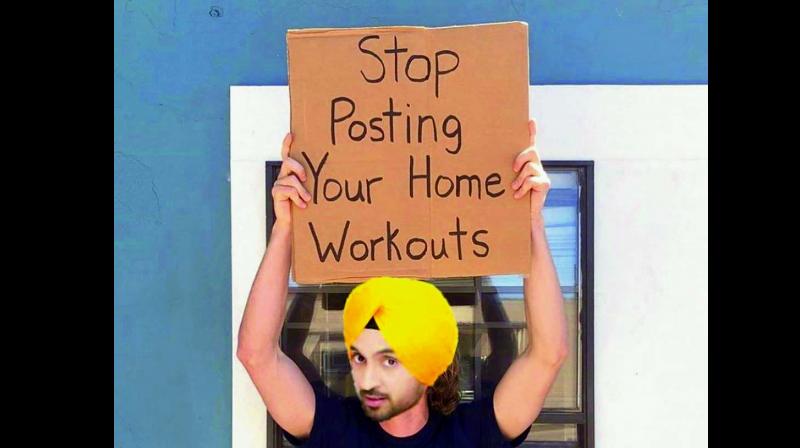 The ongoing coronavirus pandemic has opened a Pandora’s box of challenges for those trying to curb its spread. ‘Stay Home, Stay Safe’ is the message en vogue being endorsed by almost everyone, including our favourite celebrities who have been posting videos and pictures on social media that mostly include their workouts, sun-kissed happy faces and daily chores of cooking and mopping in the absence of their house help and maids.

Probably as an aftermath of such images and videos, the choreographer-turned-filmmaker Farah Khan recently took to social media to highlight the privilege of her fitness-video-posting colleagues from Bollywood. In the video, which has gone viral on the Internet, the Om Shanti Om director says, “It’s my humble request to all the ‘celebrities’ and ‘stars’ that please stop making your workout videos and bombarding us with it. I can understand that you all are privileged and you don’t have any other worries in this global pandemic except for looking after your figures. But some of us, most of us have bigger concerns during this crisis.”

Echoing the same, in what is a photoshopped image, Diljit Dosanjh superimposed his face on the popular Instagram celebrity Dude With Sign’s image, in which he is carrying a sign board that says: ‘Stop Posting Your Home Workouts’.

At a time when film releases and film shootings have come to a halt, our B-towners, while under a lockdown, have been posting videos of them exercising at home as a means to staying relevant among their fans and followers. According to the image consultant Chhaya Momaya, “Celebrities are glamour-based, and the best way to show glamour is through your body. To remind their fans that they are still glamorous, and that they are still looking good, posting fitness video is a fantastic idea.” Jacqueline Fernandez, Katrina Kaif, Sara Ali Khan and Vicky Kaushal among others are some of the actors that have shared their slice of fitness routine on their social media. However, the question arises whether such a blatant display of cushioned privilege is the need of the hour.

According to the social media strategist Mayank Jain, these videos are not a display of privilege, as it encourages fans to stay indoors, which is the actual need of the moment. “With the deep penetration of the Internet in our country, almost everybody, intentionally or unintentionally, follows their favourite celebrities. Now, because of the lockdown when people are asked to stay inside, it’s right on part of the celebrities to upload workout videos or of them doing home chores because it influences people to stay back home,” he says.

Social media may have become a medium to find a semblance of normalcy for the celebrities, but they should also not ignore the harsh reality and do whatever they can to unburden the burdened, says image consultant Chetna Mehrotra. “One side is definitely to let people know that they too are equally a part of this entire lockdown. And the other part is that when you are an influencer, you need to validate and endorse what’s happening with those who are less privileged. Now is the time when these celebrities can break the barrier and show that even though they are privileged, they are also not that privileged,” she concludes.