Entertainment   Bollywood  01 Mar 2019  Badla's song 'Aukaat' is all about Big B and his swag; watch
Entertainment, Bollywood

Badla's song 'Aukaat' is all about Big B and his swag; watch

Badla marks the second association of Amitabh Bachchan and Taapsee Pannu after the critically acclaimed and much loved Pink. 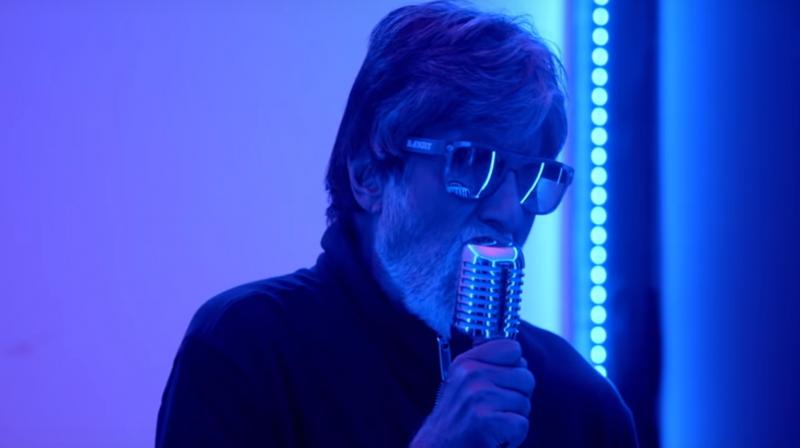 Mumbai: After receiving the great response for the very first song of Badla titled 'Kyun Rabba', which is an emotional track, now the makers have released the second song titled 'Aukaat' which will be an opening song of the film featuring Amitabh Bachchan.

The new track serves as a perfect treat to all the Amitabh Bachchan fans! The legendary baritone voice of Amitabh Bachchan in this promotional track which is released today will see the ultimate of his swag as he raps effortlessly in the track titled AUKAAT.

The song 'Aukaat' has been composed by Clinton Cerejo, the lyrics penned by Sidhant Kaushal and the vocals by Amitabh, Amit Mishra, Clinton Cerejo and rapper Jizzy. The track aptly represents the current mood and angst across the nation with ihard-hittinging lyrics.

Composer Clinton Cerejo who has composed and Produced 'Aaukaat' says, “Aukaat” an extremely hard-hitting, edgy track which has so much energy and intrigue at the same time. I also incorporated the theme of the film which is a guitar line that suggests mystery and machismo in equal measure. It’s the opening credit song which is crucial in setting up the mood and the tone for the entire film."

Talking about Amitabh Bachchan, Clinton shared his experienced "Couldn’t have asked for more as a composer than to have the quintessential hero Mr. Bachchan himself rendering the vocals on this track. In fact, he’s delivered it with so much consummate ease that he totally owns the song. I’ve worked with two extremely edgy writers -  Lyricist Siddhant Kaushal and Rapper Jizzy to create this build to a frenzied ending that the song has. Amit Mishra too joins in on the higher octave in the chorus. The track completely encapsulates the essence of an edge-of-your-seat thriller. There are times when all the elements of a song feel just right. This is definitely one of those times."

After releasing a sneak peek into the special conversation between Amitabh Bachchan and Shah Rukh Khan, the makers had an ace up their sleeve with this track which will be a  part of the opening credits of the movie and is sure to set the mood right for this super sleek crime thriller.

Interestingly, When Amitabh Bachchan first listened to the song he was highly impressed and immediately agreed to be featured in it. The legendary actor who is looking suaver than ever in the in this video directed by Bosco Caesar and choreographed by Auggy - Hitesh, is sure to surprise the audiences with his cool new avataar.