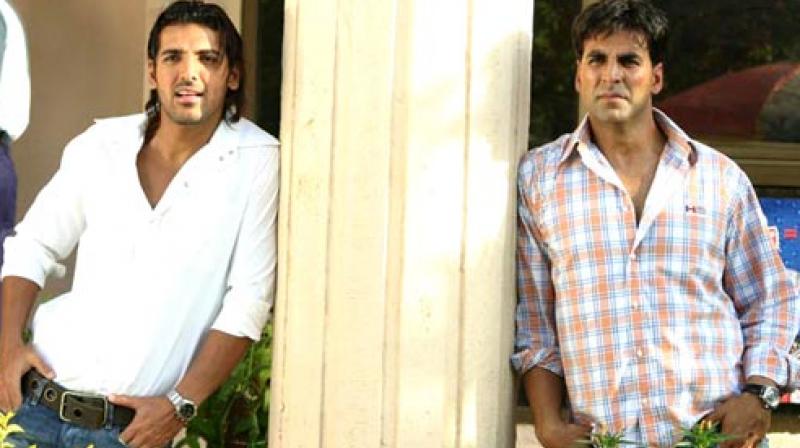 A still from 'Garam Masala'.

Mumbai: John Abraham and Akshay Kumar’s chemistry began on the sets of ‘Garam Masala’, and then it transformed into ‘Desi Boyz’ and ‘Dishoom’.

John has earlier spoken about ‘Dishoom’ having the potential of turning into various sequels. The actor feels the same about both ‘Garam Masala’ and ‘Desi Boyz’.

When Hindustan Times asked John if there are chances of a sequel to this film, he answered, "I would love to do some fun films. Also, I love Akshay [Kumar] and enjoy working with him. In fact, I spoke to him the other day, and he said, ‘Let’s do something together’. We always have a burning desire to work together as we are very alike as human beings. As for ‘Garam Masala 2’, Akshay and I have been talking about it and I think that’d be great and a lot of fun. The storyline can be that 10 years later, there are more than three air hostesses (laughs). It will be fun but you have to make those fun films with people you have fun with. Even films such as ‘Desi Boyz’ (2011) and ‘Dishoom’ (2016) can be made into sequels as they have great potential."

John Abraham will next be seen in ‘Parmanu: The Story Of Pokhran’, whereas Akshay Kumar, who last made his on-screen appearance in ‘Padman’, is busy shooting for ‘Kesari’ with Parineeti Chopra.