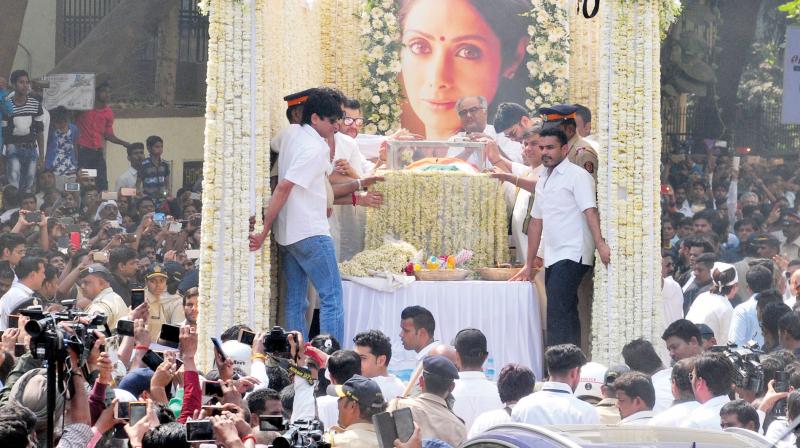 The mortal remains of Bollywood actor Sridevi were carried on a vehicle to the Vile Parle crematorium. (Photo: Debasish Dey)

Mumbai: Several fans of actor Sridevi came from afar to pay their last respects to her on Wednesday. The police had a tough time controlling the crowd that had gathered on the streets to the crematorium and outside the club where the body was kept for the public to pay homage.

Ananta Duddugutti (45), who had come from Bengaluru said, “I caught the flight from Bangalore just to have a final glimpse of the actor. I am her fan, and so I took the trouble.”

A 50-year-old woman had come to pay her respects from Chennai. The fan, who identified herself as Ms Sitaraman said, “My prayers are with her. I just came here to have a final glimpse of her.” Subhash Shinde, Sridevi’s make-up artist, who had attended the wedding in Dubai with Sridevi, said, “She was a nice and fun-loving person and always co-operated with me.”

Ali Khan, who acted with Sridevi in a Hindi movie Khuda Gawah (1992) said, “We deeply mourn her sudden demise. It’s very saddening and shocking. The whole film fraternity is in a state of shock.”

Several Bollywood celebrities took to social media to offer their condolences. Former Ms Universe Sushmita Sen tweeted, “Rows and rows of people standing in queues for hours, some with flowers, others with pictures, it was overwhelming to see the love and respect for Ma’am Sridevi both richly deserved and generously showered. A celebrated life indeed.”

More than 10,000 people were spotted outside Celebration Sports Club. Many fans were waiting even after paying their last respects to catch a glimpse of other Bollywood celebrities. Hence, the police and the traffic crew had to ask people to not surround the gates before the body leaves the club. Around 500 police personnel had been deployed to manage the crowd.