Entertainment   Bollywood  01 Mar 2017  'We will know in a while:' Vidya on working with Rajinikanth in Kabali spin-off
Entertainment, Bollywood

'We will know in a while:' Vidya on working with Rajinikanth in Kabali spin-off

The spin off is to be produced by Dhanush and could see Vidya working with Rajinikanth for the first time. 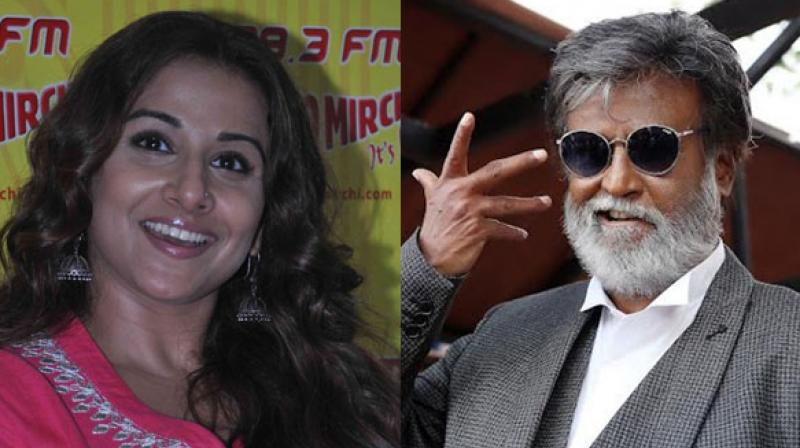 After Radhika Apte in 'Kabali', another actress, Vidya Balan, could be sharing screen space with Rajinikanth.

Mumbai: Bollywood actress Vidya Balan on Tuesday hinted that she might collaborate with superstar Rajinikanth on the forthcoming spin-off of 'Kabali.'

There were reports that Vidya has been approached to star opposite Rajinikanth in the Kabali spin-off to be produced by Dhanush.

When asked about it, the actress told reporters, "We will know in a while."

Vidya, 38, was speaking at the launch of the book 'The Wrong Turn' by Sanjay Chopra and Namita Roy Ghose.

The actress said she is currently geared up for the release of 'Begum Jaan' and looking forward to start 'Tumhari Sulu.'

"Begum Jaan is releasing on April 14. After that I'll begin Tumhari Sulu. So the preparations are going on."

Helmed by Suresh Triveni, 'Tumhari Sulu' revolves around a woman named Sulochana, fondly known as Sulu. She lands herself an unexpected job of a fun and feisty RJ and anchors a late night show.