As AbRam complains of a broken thumb, SRK gives his thumb kisses and magically fixes it in the video. 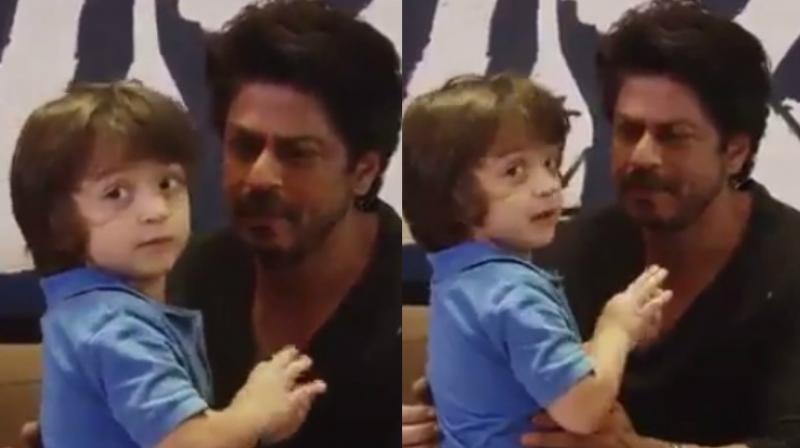 Screengrabs from the video shared on social media.

Mumbai: Shah Rukh Khan's son Abram needs no introduction as he has already become a social media sensation by featuring in numerous pictures and videos with his father.

Shah Rukh has shared screen space with numerous celebrities and yet it’s him who everyone sees and mostly remembers, thanks to his natural silver screen charm. But when it comes to Shah Rukh’s little AbRam, even the actor’s personality fails to stand out as his son adorably grabs all the attention.

Recently, Shah Rukh Khan was giving an interview where he was talking about his film ‘Raees’. Soon enough, the video went viral; no, not because of SRK but because of his cute conversation with AbRam.

Shah Rukh was in the middle of a conversation when AbRam complained of a broken thumb and sweetly gatecrashed the interview. Now this 'broken thumb' thing is an inside joke between him and his father SRK, a magic trick of sort where SRK breaks his thumb and fixes it again, leaving AbRam feeling mesmerized.

As AbRam complains of a broken thumb, SRK gives him kisses and tells him to wait for him so they can go for a shoot in an open car. AbRam surely loves joining his dad for shoots as we hear the little one instantly say, “I’m ready!”

Watch the cute conversation between AbRam and Shah Rukh here: