Knot the ‘right’ Age: Age gap of spouses matters, but

Marriage is a beautiful and sacred institution. 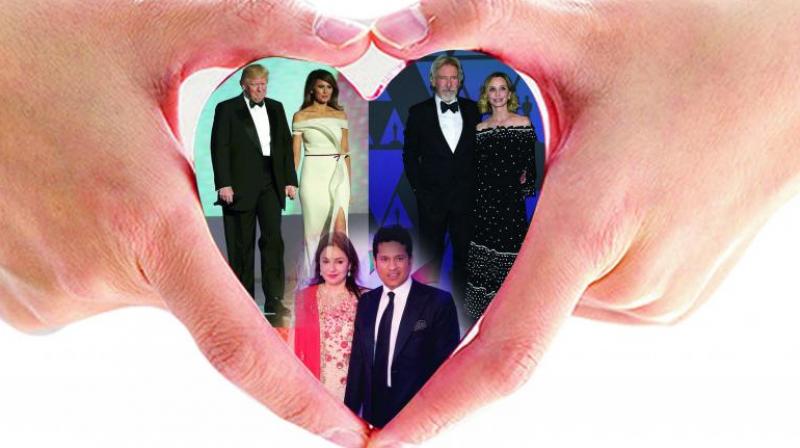 Biologically, sexually and reproductive health-wise short gap up to four to five years, where the girl is younger, works well. If there is compatibility, love and affection, age may not matter for some. Ultimately it is the individual’s choice.

A woman’s desires and sexual responses peak between 20 and 35 years. For a man it is at 35 and after. This is a reason for proper age difference.

Marriage is a beautiful and sacred institution. But it is marred by the wrong selection of partners, exaggerated expectations between spouses, adjustment problems, low tolerance levels and the failure to understand limitations of marriage.

“Marriage is an old form of association; it was never perfect; it will never be perfect, yet it is the happiest wrong we are doing on earth”, so goes the saying.

Choosing a suitable partner is the key to marital bliss. In the partner, a woman looks for capability, handsomeness, financial stability, status, virtues, health and absence of vices. A man looks for beauty, complexion, age, height, physical and mental health, education, caste, religion and family background.

It is not true that love marriages are always successful because during courting partners present the best of their personalities.

As per law, the age at marriage for a woman is 18 and man 21 years. In the past, the relationship between wife and husband was that of God — devotee or master — servant in mainly a male-dominated society. The age gap was never reckoned as long as the man was older and had better education and earning capabilities.

Women mature two to three years earlier than men as also they reach menopause earlier. The boy is expected to be older than the girl. This has traditional acceptance and scientific bearing.

It is said “age is just a number”. The age gap does not matter when there is mental maturity, love, understanding and compatibility. Different age gaps work differently for different couples. There cannot be a single rule. In wide age-gap marriages, the reality will hit hard after some time and the initial love spark may fade. Such marriages tend to split faster.

In the old, the age gap could be 10 to 15 years. Because of the complete acceptance and devotion of the wife, such marriages almost always worked well. In those days, procreation and continuation of progeny was the main issue. We still find our parents, aunts and uncles having a wide age gap but are compatible.

These days most boys and girls tend to marry their own friends, mostly of the same age. Studies infer that if they marry the same age girl or boy, egos and dislikes clash; though of same age, their mental maturity and attitudes vary.

Girls and boys have more opportunities to mingle and many times go abroad together. They have the time to understand each other and have the scope for selecting a partner with similar background, likes and dislikes. Here only love, affection and compatibility matter, not the age. Girl can be younger or older than the boy.

Studies show that the 4-5 year age gap provides the most stable relationship. Gaps more than 8 to 10 years show higher disillusionment, quarrels and disturbed interpersonal relationships, leading to separation and divorce Bigger age gaps might have worked well for some, but cannot generalise. Society frowns on more than 10-year gaps in relationships. Reality kicks in as time passes; practical and realistic aspects become important as fantasy fades.

Girls mature two to three years earlier than boys. They mature at 10 to 14 years of age. Boys mature at 12 to 16 years.

In olden days of early marriages, the norm was the boy older than the girl. A woman attains menopause around 48-50 years. Her fertility potential or reproductive capability is best between 20-30 years. Later the capability decreases and eggs in the ovary start reducing.

The man is capable of producing sperms even at 70-75 years and also can father a child.

A woman’s desires and sexual responses peak between 20 and 35 years. Sexual desire and activity, however, can continue even after menopause as they spend 1/3rd of their life postmenopausal and the span is also increasing.

For a man the sexual desire and activity peak at 35 and after. This is another reason for proper age difference. In the 40-50-year age group, the man has more desire but wife’s desire will be waning. At 60–70 years, man’s sexual capability decreases. If he marries a very young girl, the sexual incompatibility becomes obvious.

Biologically, sexually and reproductive health-wise short gap up to four to five years, where the girl is younger, works well. If there is compatibility, love and affection, age may not matter for some. Ultimately it is the individual’s choice.

‘Half your age plus seven’ rule

It states that one should never date anyone under half his age plus seven years.

Example: A man of 40 can date a girl of 27 years-plus, not younger because it is considered taboo.

The rule seems to have originated in France. This rule applies to a girl marrying an older man.

Finally, there is really no rule about “optimal age gap in marriage”. Age difference of one to five years seems to be optimal for most couples, the female spouse being younger.

(The author is consultant obstetrician & gynaecologist and sexologist & marriage counsellor, Bengaluru, and has published books on sexual and reproductive health. email: drpadminiprasad@gmail.com)