More doctorates is wonderful as it increases the knowledge base of societies, but it simultaneously generates an oversupply in the job market. 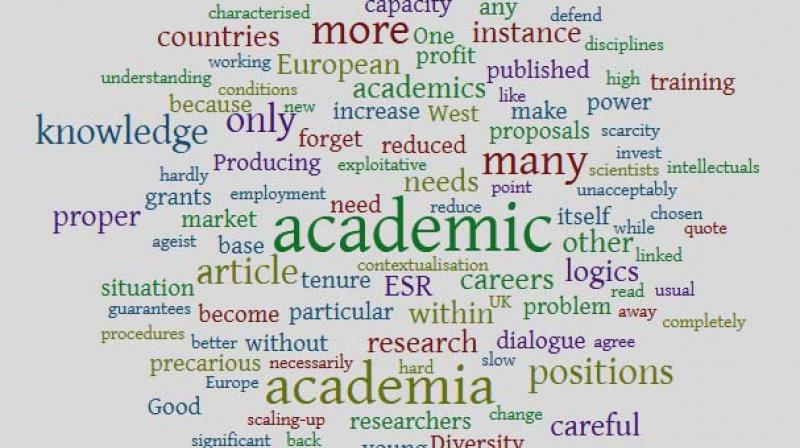 Scholars who are passionate about research end up without rewarding career opportunities in academia. Jobs in non-academic sectors are infra dig. These brilliant minds are therefore often lost in an indifferent society. Most nations lack long-term strategy to tap their potential.

I’ve read the ‘Track the fate of postdocs to help the next generation of scientists’ article with great interest, because it discusses a significant problem within academia. It combines the formulation of a particular strategy with a contextualised (and broad) problem analysis. One can only agree with the need to monitor the careers of academics, in particular of those groups with a weaker power base, with the usual respect for the research subjects’ privacy and data confidentiality.

Talking from a European perspective, this idea is not completely new, and research into academic careers has been published, even if this knowledge has not circulated sufficiently. For instance, the Rathenau Institute published a 2013 report on academic careers in the Netherlands.

Taking a step back, I would very much endorse the problems that early-stage-researchers (ESR) have to face. I don’t like to call them “young researchers”, as the article sometimes does, as career-stage is not necessarily linked to age, and “young researchers” is actually an ageist term. ESR often find themselves in a difficult position, after completing their PhDs.

What we see in Europe is a shortage of proper academic positions, and an increase of precarious academic positions. For instance, zero-hour contracts have become more and more commonplace in academia, in different countries. These practices not only create exploitative situations for ESR, but they are destructive for academia itself, both for mid and long-term. We also see an increase of doctorates, which is in itself wonderful, as it not just increases the knowledge base of entire societies, but it simultaneously generates an oversupply for a job market that is already characterised by scarcity.

As the article suggests, there is an urgent need to invest more in the universities, so that more people can get proper positions, bringing down the general work load which is unacceptably high. It is also counterproductive. This needs to be combined with a cultural change, supporting slow science and a shift away from competition.

But there are two other points to be made. First, we should be careful to instrumentalise and economise academia. Academia produces knowledge, which is beneficial for society. But in order for academia to play its role, academia cannot be reduced to its economic potential and to market logics. Knowledge needs time, dialogue and failure. If a PhD (or any other form of academic training) is reduced to its capacity to generate employment and profit, we miss the important point that better understanding of societal complexity — which is what academic training provides — has many fields of application. “Producing” critical citizens — intellectuals — matters because they, to quote E. Said, can speak truth to power. Producing creative minds can bring many things, and profit is only one of them.

Second, and here I am a bit in opposition to the article, we should be careful to lament European fragmentation. Diversity is also a benefit, as it allows for the contextualisation of research funding. We should also be careful to defend scaling-up logics. For example, the EU has chosen fairly large grants, with systems that come close to winner-takes-it-all logics, which means that many scholars apply, and hardly anyone gets access to these grants. Horizon 2020 selection procedures are cruel. Good proposals do make it, but many other good proposals don’t make it. We should keep in mind that diversity needs to be protected, also within academic disciplines and institutions, otherwise we reduce our capacity for dialogue and critique, leaving only mainstream approaches alive. Structurally the situation is similar in all Western countries. In the USA, tenure is hard to get, requiring considerable sacrifice from those who aspire to obtain it, without any guarantees. There (and also in the UK) we risk creating strong hierarchies, with an academic upper class, that is well-protected and can enjoy its academic freedoms, while the teaching is done by those in precarious working conditions, without little hope for upward mobility.

But we shouldn’t forget the differences within the West, where Sweden isn’t the Czech republic. For instance, tenure is not used in many European countries, and academics have proper positions when they become faculty.

And more importantly, we shouldn’t forget the global south, where the situation for most academics is still far worse than in the West.

Fate of postdocs tracked to help next generation of scientists

(The author is Professor in the Department of Economics and Media at Uppsala University, Sweden)