Justice must be a fundamental right

Pendency of cases — an everlasting bone of contention for the Indian judiciary — is once again in the spotlight. 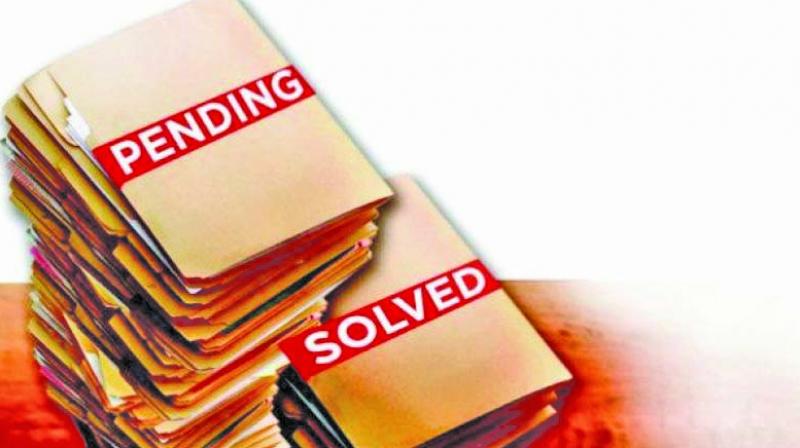 With 2.81 crore cases pending before Indian courts, the judiciary needs to get its act right and deliver speedy and quality judgements.

Pendency of cases — an everlasting bone of contention for the Indian judiciary — is once again in the spotlight. With 2.81 crore cases pending, the Indian judiciary faces a unique challenge of reducing this number quickly without compromising on the quality of decisions. After all, not only must justice be done, it must also be seen to be done. While the lack of court infrastructure and shortage of judges is often cited as the root cause of pendency, there is more to the problem than that.

Let’s begin with the magistrate’s courts, where most cases begin their long journey. The daily routine of every magistrate begins with pronouncing a host of adjournments and dates for many cases where the parties just don’t turn up. If his daily cause list has 150 to 200 matters, there are at least 40 to 50 where dates are given because no one is present, demonstrating the lack of seriousness of the parties in pursuing the case. Such matters are then listed after three to four months, adding to the pendency.

After the daily routine of adjournments is pronounced, the magistrate begins with deposition of witnesses. Each witness testimony is lengthy and on an average, consumes almost 30 minutes of court time. If there is a line-up of witnesses then virtually half the day is consumed.

It would be more expedient if recording of witness statements was done before a dedicated court commissioner in the presence of all parties. This would free up the magistrate to focus on final hearings and passing judgements.

Another solution often cited as a magic bullet to reduce pendency is the establishment of tribunals. The National Green Tribunal is one such example. Established in 2010 as a statutory body to adjudicate environmental disputes, it has heralded section 19 of the National Green Tribunal Act, 2010, which prescribes a time limit of six months to decide matters. Further, it also waived compliance with the cumbersome requirements of the Code of Civil Procedure, 1908, and instead, mandated adherence to the rules of natural justice. In addition, adjournments are frowned upon and penalised with heavy costs.

While the National Green Tribunal has enjoyed reasonable success since its inception, it too has fallen victim to the malaise of dilatory tactics that have logjammed Indian courts.

For instance, several critical cases involving real estate projects worth thousands of crores of rupees are in limbo. The respondents, many of whom are powerful builders and industrialists, resort to dilatory tactics by filing miscellaneous applications raising preliminary objections like locus standi of the petitioner and limitation.

More often than not, the tribunal puts off hearing the case on merits and instead delves into these petty issues. As a result, such cases go into limbo with no decision in sight. A prime example would be the National Green Tribunal, Western Zonal bench in Pune, where several cases from 2014 are lingering. To worsen matters, interim orders are seldom passed, as a consequence of which polluters and violators have a field day.

Even in cases where the tribunal has dismissed such preliminary objections, the parties move the High Court and obtain a stay. Even though section 22 of the NGT Act, 2010 mandates a direct appeal to the Supreme Court, High Courts routinely entertain petitions against NGT orders citing the case of L. Chandra Kumar vs. Union of India. Thus, promising cases that were expedited by the tribunal join the serpentine queue of matters clogging the cause lists of the High Court.

Similarly, while the Real Estate Regulatory Authority (RERA) and Real Estate Appellate Tribunal (REAT) have been established to quickly dispose of builder-buyer disputes, section 58 of the RERA Act, 2016, provides for an appeal to the High Court.

While justice delayed is indeed justice denied, the focus must be on the quality of judgements also. In a bid to reduce pendency, proceedings in the High Court are gradually assuming a summary nature where judges are more disposal-oriented, focusing more on quantity of decisions rather than quality. This frequently results in flawed decisions, which negates the very efforts to remedy the injustice caused by delayed proceedings.

Similarly, the summary nature in which the Supreme Court dismisses Special Leave Petitions or SLPs also perpetuates the problem. Meritorious SLPs such as the Mumbai Mahim Bay Coastal Regulation Zone (CRZ) case, where the Bombay High Court declared Mahim to be a “bay” and reduced the CRZ (coastal regulation zone) from 500 to 100 metres, giving a bonanza to builders, was dismissed by the Supreme Court without any reason. A grave injustice to public interest was caused and the environmental consequences may be for all to see.

As I have said, tweaking the civil and criminal procedure codes by permitting witness depositions before court commissioners will enable the lower judiciary to focus on hearing parties and writing judgements.

Further to this, the Supreme Court has requested the Central government to constitute the ‘National Court of Appeal’ with regional benches in Chennai, Mumbai and Kolkata. This court would hear appeals from decisions of High Courts and tribunals, relieving the Supreme Court of its burden and possibly putting an end to summary dismissal of SLP petitions. Such solutions must be implemented quickly, before the rising tide of India's population submerges the entire system.

(The author is a practising lawyer in the Bombay High Court.)