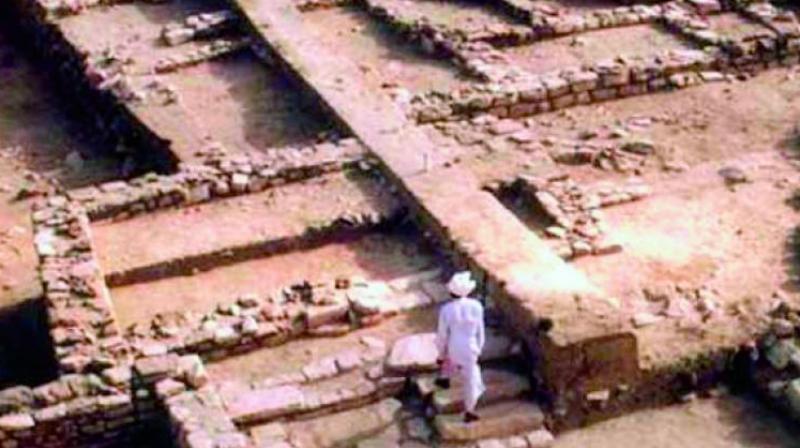 The findings put Indus Valley Civilisation much ahead of other ancient civilisations such as the ancient Egyptians (7,000 BC to 3,000 BC) and the Mesopotamian civilisation (6,500 BC to 3,100 BC). Photo: DC file

A recent study, co-authored by 92 scientists, says the Indus civilisation was an admixture of Iranian agriculturists and South Asian hunter-gatherers. It strengthens the Aryan migration theory and is based on analysis of DNA data. But traditionalists argue, citing mainly the Rig Veda, that the Valley culture spawned east-to-west migration.

10,000-year peek into past is just a fraction of history
The first thing that I felt when I read the paper titled ‘The Genomic Formation of South and Central Asia’  is that it has achieved something which is on the verge of impossibility. Many believed, experts included, that it would be absolutely impossible to extract and read DNA from ancient artefacts and burial sites from this part of the world. But the researchers did so successfully. The great thing about the paper is the amount of data generated and the technology that has been developed. To begin with, it is a huge technological breakthrough.

The second important thing is the real interdisciplinary nature of the work. The coming together of experts from different disciplines. So a considerable amount of data and, more importantly, huge amount of intellectual inputs across disciplines and across a number of individuals have been brought into this study.

Analysing ancient genomes is like travelling in a time-machine into the past. However, one thing we should keep in mind when we think about ancient genome research is that though there have been significant breakthroughs in our ability to study the ancient genome, yet for most parts of the world, definitely for South and Central Asia, it has not gone beyond 10,000 YBP (years before present).

Contrast that to the first anatomically modern human (AMH)'s movement out of Africa (~100,000 YBP), or the first evidence of AMH (~200,000 YBP). These dates may vary a little bit depending on whom you are talking to, but the fact remains that this exercise of deciphering history from ancient genomes is still shallow in time depth. When looking into the peopling of Asia, we find evidence (genetic, archaeological) that AMHs have been living in the Indian subcontinent and South Asia for a very long period of time (more than 60,000 years). So considering that kind of a time depth these genomes reveal which went from, if we take the most ancient of them that dates well up to 8,000 years BC which is ~10,000 YBP is like the tip of the iceberg.

The revelation of this time travel has been the deep intricacies of migrations and movements.

It might be noteworthy to mention here that all of this happened after we domesticated plants and animals. Or in other words all of this is after agriculture had been discovered. In the post-agricultural period, AMHs were able to generate surplus, had the ability and technology to feed a larger population.

This resulted in rapid population growth and probably we can argue that that would in turn also lead to migration and movement of people and technologies.

The study reiterated the fact that there have been many large and small-scale migrations across Eurasia. Eurasia has this unique geographical advantage of extending in an east-west direction. Migration hence was easy in Eurasia, as it would not require adjusting or adapting to a new environment and geo-topography or climate.

This was also hugely aided by the domestication of the horse and discovery of the wheel, which made movement efficient and easy. We have seen the results of these migrations, just looking at the speed at which new technology has spread across Eurasia like wildfire.

One great revelation has been the similarity of migrations in Europe and Asia. Migration has been like a layered cake; layered on different time intervals. One major ancestry that forms the base layer is the ancestry of people from Zagros agriculturalist, on which we find a major layer of the Anatolian agriculturalists (AnAg) as well as the West Siberian. The AnAg are probably also the people who are responsible for crop-based agriculture across the region.

The superimposition of a later migration of the Steppe pastoralists, also linked with the spread of Indo-European languages, adds another layer of complexity to genomes of most populations.

The argument in characterising the Indus Valley Civilisation (IVC) and India is where I find the data and the rigor to be inadequate. The data is sparse, as they have not been able to successfully sequence too many people from that period or that geographic region.

The authors of the paper also mention the data to be too ‘noisy’ and traditional methods of analysis applied on other parts of the paper did not work that well. One crucial piece of information, however, is the lack of Anatolian ancestry in what the researchers have termed as Indus Periphery Samples. If we are to believe that the AnAg are people who spread crop-based agriculture across Eurasia, then what remains enigmatic is where did the knowledge of agriculture in IVC come from? Is that an independent domestication of crops further South or in Deccan India, or is there another completely unknown set of events which resulted in the prosperous urban IVC?

Last but not least, I have seen misinformed blogs about this article, where people have equated IVC, spread of IE language and Vedic culture. The evidence of the IVC with IE and Vedic culture is completely lacking and if anything the authors of this paper hinted that the people of IVC might be Dravidian speakers. We wait with great anticipation what is to be revealed about the relationship of this study about Central and South Asia with what might complimented with a better understanding of the history and pre-history of South and South East Asia.