THE ASIAN AGE. | DR A. RAJALAKSHMI

Antibiotics are recommended for surgeries to tackle the bacteria that reside in the skin at the site of skin incision. 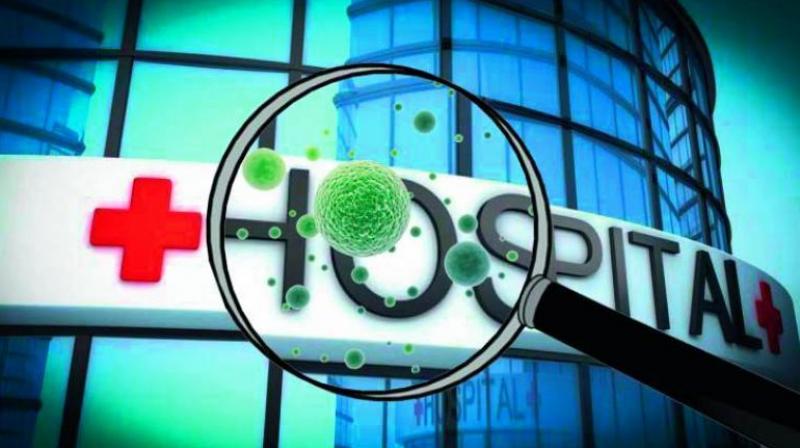 Patients who undergo surgery can develop infection commonly due to skin bacteria that get into the incision/ wound made during surgery. Surgical site infections (SSIs) are the second most frequent cause of healthcare-associated infections (HAIs) and is the most frequent type of HAI in low and middle income countries (LMICs) as estimated by WHO. These affect patients who belong to both LMICs as well as high-income countries.

According to WHO, around 1 in 10 who undergo surgery in LMICs develop surgical site infection. In Africa, around 20 per cent (1 in 5) of caesarean section procedures lead to wound infection. Around 1-1.9 per cent of people who undergo surgery in USA develop surgical site infection as per WHO and CDC. In Europe around 500,000 people are affected by post-surgical infections.

According to INICC (International Nosocomial Infection Control Consortium) which has the data on HAI from developing countries, 5.6 per 100 surgeries develop surgical infection. However, this varies between different types of surgeries based on types — clean, clean contaminated, contaminated or dirty. Thus people in developing countries are at 3-5 times increased risk of developing infection as compared to developed countries. Surgical infections can be caused by bacteria that are resistant to commonly used antibiotics, leading to increase in the cost of therapy and threat to lives of millions of surgical patients each year.

Several factors come into play in determining surgical outcomes and these could be patient-related, procedure-related or operation theatre (OT) conditions. Generally those surgeries which are carried out on an emergency basis or in a patient who is already harbouring an infection or has open wound, carry higher risk of infection following surgery.

In many LMICs including India, theatre conditions and infrastructure are concerns for maintaining asepsis. With inspection visits from accreditation bodies like NABH, many hospitals are adopting norms for operation theatre requirements, but these need to be ensured on a continuous basis. Following asepsis throughout surgery is a very important factor determining outcome and OT conditions and sterile instruments play an important role.

Patient factors include associated diseases the patient has (like diabetes), which determine wound healing. Wound healing is impaired in patients who are obese, diabetic, who have renal, liver disease and on steroids or immune — suppressive drugs, smokers. Thus most patients who undergo cardiac surgery have many of the patient-related risk factors mentioned above putting them into higher risk group for surgical wound infections as compared to thyroid surgery done in a healthy adult. Apart from these, several other factors come into play determining surgical outcomes.

How do we prevent surgical infections?

CDC and WHO have put forward collective approach to prevent surgical site infections. In 2017, ICMR came out with Indian guidelines with international recommendations. These are multipronged approach to be followed before, during and operation, including asepsis during surgery. By following this collective approach and improvement programme, surgical site infections can be brought down by 39 per cent as per WHO from studies done in Africa and 17 per cent decrease in SSI-related to 10 selected procedures were noted between 2008 and 2013 in the USA.

Antibiotics in preventing surgical infections
Antibiotics are recommended for surgeries to tackle the bacteria that reside in the skin at the site of skin incision and ideally given within one hour of surgery and usually not recommended after skin closure except in some high-risk surgeries where it may be continued for up to 48 hours. Hence the right antibiotic at right dose and timing and for the shortest time (usually not beyond skin closure except for high-risk surgeries) is recommended by WHO and CDC. In cases which develop post-operative wound infection, further antibiotic need will be decided by the treating doctor based on the clinical condition and wound culture reports. Thus antibiotics have a role in preventing surgical infections but for recommended period.

Antibiotics given to prevent surgical infections should not be continued longer than recommended as it does not benefit if given longer than recommended and leads to antimicrobial resistance. Preoperative antimicrobials administered as prophylaxis for SSIs account for the majority of in-hospital antimicrobial prescription and lead to antimicrobial resistance, super infection with resistant pathogens, toxicity and increased cost. In India, not much published data are available on the pattern and amount of prophylactic antibiotic use but are considered high.

What a patient can do to prevent surgical infections?
Both CDC and WHO have put forward a set of “do’s and don’ts” before procedure. Hair on the surgical site (except in some cases) should not be shaved with razor as it increases infection rate by opening up pores at the site of hair follicle and if need be clippers are used for hair removal and are done in hospital close to the procedure day.

SSI rate — an important quality indicator
Hospital-based SSI rates have become a measure of quality assessment for hospitals, as they are probably the most preventable type of HAI. Thus SSI prevention is a multipronged approach with involvement of stakeholders, surgical team, hospital infection prevention team and active participation of the patient to work towards following all procedure measures to prevent infection.

Antibiotic use during surgery is just one of the factors and not the ultimate factor in determining wound infection.  Appropriate use of pre-surgical antibiotic prophylaxis would contribute to prevention of SSI but limiting to the recommended dose would also prevent antimicrobial resistance (AMR).