Time to watch your waste line

It’s easy to blame the government for overflowing garbage bins and clogged drains, but it’s ‘we the people’ who don’t bother to separate trash. 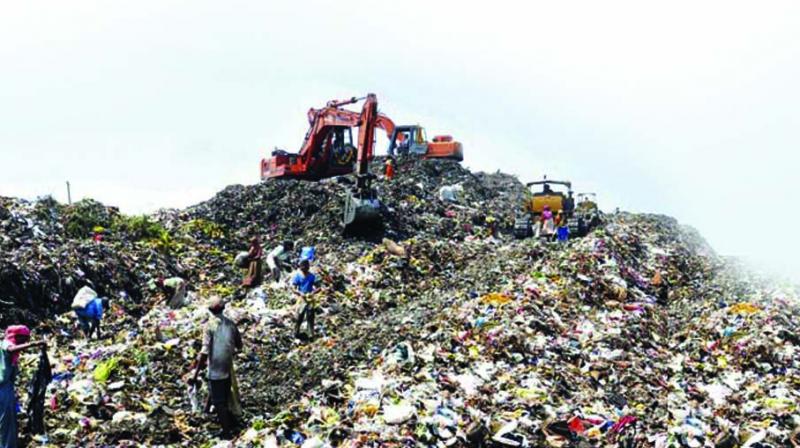 Climbers to the Everest have been fined if they didn’t bring enough rubbish back with them after scaling the peak.

Pictures of the Mt. Everest show clear blue skies with cloud puffs above the peak. Below that grandeur lie tattered tents, discarded haversacks, fraying ropes, innumerable water bottles, tissues, metal rings, plastic bags, rubber footwear and human waste. That’s not surprising. We all know what surrounds the neighbourhoods of Gangotri, Vaishnodevi, Kamakhya-devi (dirtiest of them all), Haji Ali, Sabarimala, or any shrine in India.

Climbers to the Everest have been fined if they didn’t bring enough rubbish back with them after scaling the peak. Sherpas were paid $2 for each kilo of trash they picked up. Tourist climbers have to “voluntarily” clean up their mess after them.

Can this method be applied to tourists visiting Goa, Haridwar, Varanasi, Vailankanni or? Can we insist: “If we don’t see you transporting ‘X’ kg garbage back from the place you visited, we will fine you ‘X’ amount"?

As the world’s third-largest garbage generator, India has more than 45 million tonnes or 3 million truckloads of garbage untreated and disposed of by municipal authorities daily. Three million trucks lined up is 25 times the distance between America and India. Cities generate more garbage than villages. City-dwellers generate about 0.65 kg of garbage per person per day.  We can treat about 500 grams of this at home, by ourselves. Also, the rich generate more waste than the poor.

Launched in 2014, the Swachh Bharat Abhiyan tackles waste management, cleanliness and sanitation. It is meant to cover collection, scientific processing, disposal, reuse/recycle of garbage (officially called municipal solid waste) for all towns. It is expected to be “completed” by 2019. The estimated cost of the mission is `62,009 crore. Much of its success depends on whether we segregate and correctly dispose of our own garbage.

We can curse the government and safai karamcharis endlessly but we have to be disciplined enough to manage our own kachra. We have encroached on backwaters, seas, rivers and lakes, built concrete structures on them, clogged the drains with sanitary napkins, condoms, plastic bags and then expect no flooding! Irresponsible dumping of waste leads to blockage of drains (Mumbai floods) and landfill mounds 15 storeys high (Ghazipur).

Waste can generate up to 439 MW of power from 32,890 TPD of combustible waste. This includes refuse-derived fuel (produced by shredding and dehydrating garbage) and electricity from biogas. We could have 5.4 million metric tonnes of compost (annually) to support farming. Plastics, paper and glass constitute 17 per cent of recyclable waste, which comprises high-calorific-value crucial fuel for solid waste-to-energy plants. India has 8 plants for this, China has 150.

Augmenting, operating and maintaining trash management systems requires huge investment, cost-effective technologies, public-private partnerships and correct disposal habits in every home and workplace. At household level, recyclables are collected by kabadis and by the informal sector from compost plants and dump yards. The sorted material is sent to recycling industries for conversion into useful products.

It’s time we tackle our own trash by having two bins, one for the kitchen (wet waste) and the other for paper, plastic, metal, cloth (dry waste). Peels, seeds, even bones, leaves, stems and leftovers decay into compost even in small pots. If done correctly, there are no smells or insects. The resultant product helps plants to flourish in tiny balconies or windowsills. Some housing colonies and many families grow vegetables this way. We can’t have a municipal employee chasing each person who spits or urinates, or throws domestic waste from the scooter/car.

To know whether garbage management works, look at the places outside India where you see no piles of trash anywhere. Passengers toss nothing outside train/car/bus windows. The pristine landscapes have not become endless, stinking, ugly garbage mounds. There is very little manual sweeping and nil scavenging in those places. Social and personal discipline alone works. Goa, once Indian tourism’s pride and joy, is a classic example of destruction by plastic.

For a cleaner living, we have to follow the 3-R mantra: Reduce-Reuse-Recycle. You save money, too, when you live by it.