It is the prerogative of artists and writers to decide the construct of their work, doesn’t matter what context academic critics read it in 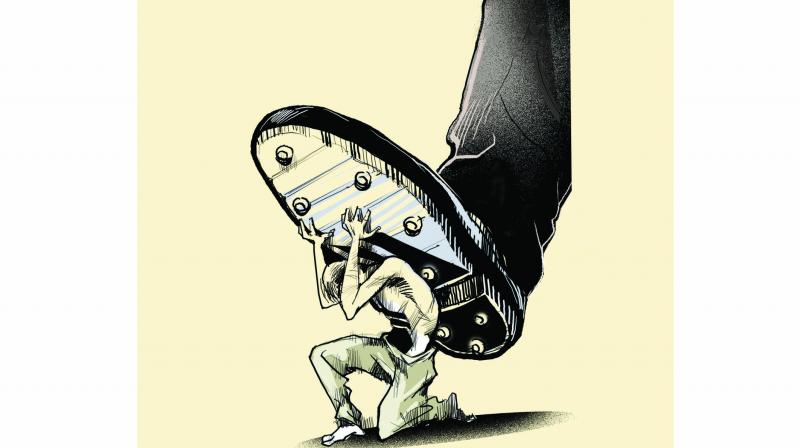 The scars of facing a firing squad are deep, and can silence the voice within.

In his epic novel Catch 22, a defiant work that defied all conventional wisdom on writing a novel; Joseph Heller says: ‘Clevinger knew everything about literature… except how to enjoy it.’ Writers tell stories for all humanity, and their imagination easily surpassed identity. It need not, but it can. Herein lies the choice whose prerogative to make lies completely with the writer, the artist, not the academic critic pursuing contexts within which to read the text.

An author can defy structure, indeed, great ones do. But what the academic reader also misses it that the reader does so. Go to a book store and try to find a book shelf of post-colonial literature to pick a copy up. Or try guessing the odds of a lay reader seeking a recommendation - "what would be a perfect post-structural Irish woman author who harnesses the stream of consciousness devices?" or "do you have modernists literature with inter-racial tensions set against collapsing and degenerating social canvasses of Asia with a gender bias as a strong sub-theme?"

The academic world operates within the circles of criticism, of seeing a mosaic of larger political themes and predicting the next mega-trend of where art is headed, the artist herself often does not. To irrevocably tie the artist to a fidelity for a secondary function of criticism, secondary because you criticise what has been already written, and produced, is to take away or clip the wings of infinite imagination.

The politics of identity has acquired a strong headwind. Anybody can identify with themselves, in identifying with people unlike oneself is the greatest gift and power of an artist; who in so doing exemplifies the acme of empathy and its possibilities. When we read Dickens, we feel the hunger and fear of an orphan as he walks up to ask for another helping of soup; not wonder if this was the start or a new era of post-industrial-revolution literature or its evolution to near perfection.

But identity today is entrenched; a politics that seeks to subjugate and limit art before it is even conceptualised; the sword of censorship swishing around even before the action of the creation. It is like the effect the Czar wanted when he sent Dostoevsky on a Siberian tour with an added attraction of a live interaction with the firing squad; and at the last moment cancelled it. The scars of facing a firing squad are deep, and can silence the voice within.

The politics of identity has tailgated with the academic criticism, its cloud ensuring any voices to the contrary are dealt with strongly. If you are a man, how can you write about a woman? If you are an American, how can you write about an Indian; or the other way around? How can a Dalit’s pain be felt and penned by a non-Dalit? Identity has created more silos in art, and imposed greater limitations than the worst of people-dividing tactics of imperialism, racism or communalism - for its stifles people into ghettos in soul.

The accusation of appropriation is the death sentence. There is a conspiracy here: the need for the school of realism in art to establish a monopoly and deathspray the fields of romanticism. Stick to your own self, your own life, your own experience while writing, while dreaming… or else you will face charges of stealing a dream that legitimately belongs to someone else.

When Chimamanda Ngozi Adichie dismissed post-colonial as a “scholarly section created by professors in need of jobs”; she made three mistakes. One, she underestimated the fury of our age: the 21st century love of realism is “…the rage of Caliban seeing his own face." Retaliation had to be swift. Second, she possibly did not read the beautiful line that explains many a paradox, including the purpose, and futility, of a loud cacophony called a television prime time debate - you cannot explain a point to a man whose job depends on not understanding it.

But most significantly, she makes the benevolent mistake of the artist, whose creative surplus initiates all art, the quest to create beautiful things, to find aesthetic meaning to life, contemplating the kindness of the universe that may otherwise be dark and empty that the impotence of the critic is dark, ugly, and hate-filled. The inability of those who can neither create like the artist, nor appreciate and enjoy it like the art lover, the reader, leads them to attribute ugly meanings to beautiful creations of art.

So Adichie has betrayed the aspirations of the tryst of Nigeria by daring to question a professor whose chair, and salary, is assured only as long as post-colonial studies are held in esteem and considered valuable in subsidized academic campuses across the world. When you try to tell a story of a little girl born in a Nigeria which has found Independence long ago, the academic will not let you just tell a story. Not for a second is it the argument of anyone that the barbaric cruelty and inhumanity of colonialism, the injustice of racism, or the sustained brutality of the caste system have no significant impact on people, society and nations: it is so humungous it cannot miss anyone; much less so an artist. In sculpting each sentence, reworking each phrase, choosing each word: the artist knows the value of every detail, every judgment: the impact of early morning sunlight on a lady’s face as tears roll down slowly across her cheek are clearly understood by a writer. To then miss the impact of a British empire

on a nation of a billion people after centuries of subjugation is akin to accusing the sub-atomic physicist of been oblivious to the asteroid.

If we continue to take the academic critic too seriously, instead of dismissing them with disdain, we will soon believe that humanity is in grave error by not waiting for the space alien to write about their invasion of earth and accusing science fiction writers of portraying the Martian without sensitivity. Stories are stories, books are books; they are well written, or badly written. That is all.

Sriram Karri, author of  Autobiography of a Mad Nation, is a novelist and columnist.