When a sea of white horses hits the land

The ocean knows it can flood the entire planet. It is already at it since the last ice age. 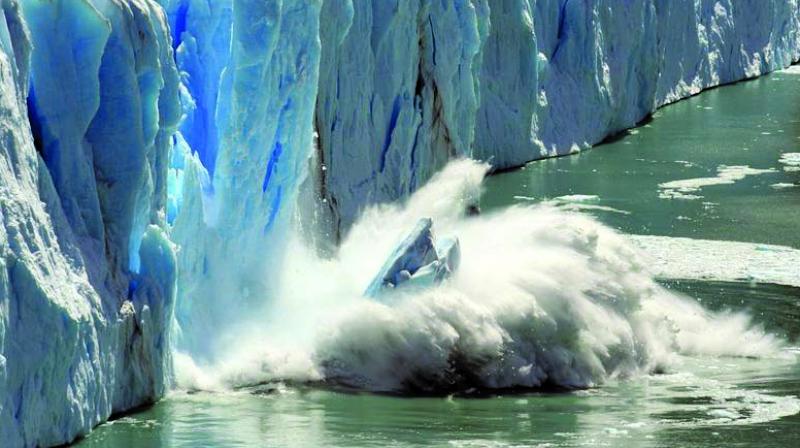 The world should know by now that sea level rise is real.

White horses are the companions of sailors. For some, they are warning signs; for others they are revellers. In nautical terms they are the white caps over the waves broken by the wind. Imagine watching white horses trotting around in ambling gait from the balcony of your third floor apartment on the marine drive with the floors below already swallowed by the sea! Isn’t that exotic for a last look? Yes, the sea has already crossed the boundaries of humans.

The world should know by now that sea level rise is real. Many are likely to get displaced. The calamity could be better handled if the United Nations and its responsible members urgently consider a legal regime as an adjunct to or independent of the UN Convention on the Law of the Sea (UNCLOS) to accommodate the displaced without loss or threat to the receiver. Urgently, because the time is short relative to a viable solution. The entire zoning by the UNCLOS will go topsy-turvy; more disputes may arise between nations.

Arjun, a promising business student, wanted to know the most beautiful place on Earth. “New Zealand,” I said almost. But the sailor in me couldn’t resist the temptation to say it was the ocean. No doubt, New Zealand is romantically beautiful. But an allegedly displaced and hopeful Kiribatian missed it. Disappointment loomed large on his face when the Supreme Court of New Zealand refused asylum in a 2014-ruling that a person displaced by sea was not a refugee. He was from the island republic of Kiribati that is almost a floating nation with sinking islands today. The court ruling throws up a challenge to nations — those who will sink and those who will be sought after for refuge under pressure.

Simulations show the fate of nations. Coastal states of India will end up as near shore islands. Lakshadweep, Maldives and most of Bangladesh will vanish under. Inland land areas in West Bengal including Sunderbans are already getting inundated. Many oceanic countries will sink. The governments need to shift their perception of sustainable human system under assured destruction by sea or surrender to nature.

Powerful forces are at play advertently. Climate change is a fine argument in the economic game plan of nations for selective but fleeting well-being. But the reality is that sea level will rise even if we stop burning fossil fuel. There are other reasons.

Looking at the history of sea level rising, one can see the default practically hidden in the process of the planet itself. The sea level was so low in the early days that the people could think of walking to the end over land. This also answers the reality of our very own Ram Sethu as a walk across ridge to Sri Lanka umbilically connected with India in the peninsular anatomy since the big break-up from Pangaea. Today it is under the sea. It will go deeper.

Nations that do not have higher grounds to retreat will be the worst sufferers. People from the sunken world will move into other countries. Obviously asylum will be refused. World opinion will be divided. Acceptance of aliens will undoubtedly cause national security problems to the target countries.

Only Kiribati and Maldives have raised alarms so far at the international level. Many nations will need domestic laws to settle people displaced internally. There is a need for international regime supported by national laws to accommodate outliers. Within this regime the nations that accept the displaced population should be compensated rightfully in terms of properties by the nations that are inundated and uninhabitable.

In conclusion, the threat associated with the rising sea level need to be accepted. It is evident from the various protocols and regimes to regulate global warming. The effects of rising temperature are visible from the Arctic to an interior village far from the sea coast in West Bengal. The ice is thinning at an unusual rate in the Arctic that could change the temperature and salinity of sea water and the direction of the ocean currents that balance the global climate and natural environment.

There is the other side too. Optimists may ask whether there is an upside for sea level rise. While the melting ice may sink and wipe out low lying territories, on the upside, open up new territories and sea routes such as the northern sea route. That could create new found geoproperty fit for capital investment as a factor of production and generation of wealth. It is too early to comment, though. Whatever, we can’t welcome the sea at our doorstep however exotic it may be.

The Earth goes through ice ages when everything is cold and silent. It has gone through at least five of them, scientists say. The next one is overdue according to indicators.  We are heading towards it. The Earth has various cycles of its own, framed in time. It is based on the forward (only) change in entropy (irreversible) as in the case of all creations of energy. From one ice age to another is an interesting journey. First the ice will melt as Earth heats up continuously. The sea gets filled up slowly and becomes an ocean. Melting ice will clear the high grounds. This will continue till the sea level goes beyond the manageable limits and sinks lands once again. Thereafter the water gets cooled and frozen.  The next ice age begins.  The ice age (colder period) is called the glacial and the warmer in between periods are called interglacial. Life forms go through both the periods (glacial and interglacial) though only during the interglacial one gets a chance to write such articles and complain publicly.

There are various other reasons for the sea to lift up and sink the ground. Worse, an all-out nuclear war or a hit by a giant asteroid can call for a prithvi bandh followed by a cool ice age.  Isn’t that cool?

So, what do we expect to happen in future?  At least let us not aggravate the sufferings. It is the responsibility of those who govern.  In a democracy, it also means us, ‘We, the People’. God may have built the world, but the Dutch built Holland. The country has been reclaiming land from the sea for nearly a thousand years — much of Zeeland was built that way.

Sea level rise does not yet panic the Dutch.

(The author is a former director- general of Indian Coast Guard. His forthcoming publication: Revisiting National security: Governing for Wellbeing)