Discourse   17 Aug 2018  The dreadful malaise of bigotry: There’s bias, even in love
Discourse

The dreadful malaise of bigotry: There’s bias, even in love

Time changes everything. But sadly, it doesn’t improve anything that is deeply rooted in religious sentiments. 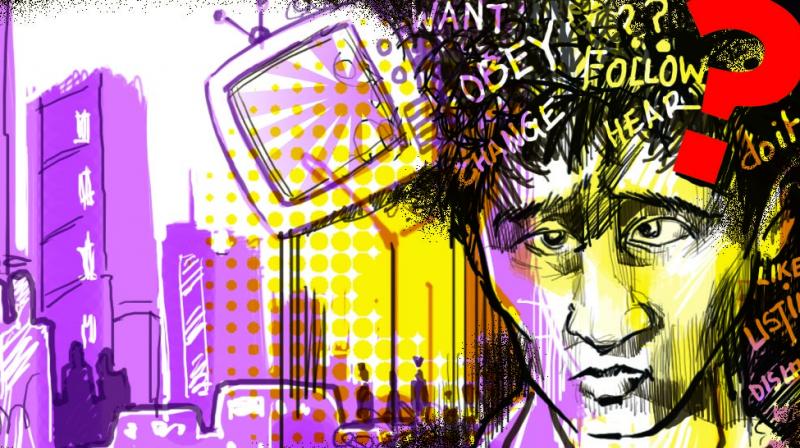 In this fast-changing, fast-deteriorating world, the misfortune of being a victim of bigotry follows me everywhere.

Every time bigotry is mentioned I remember a man pointing a finger at me and asking me an angry question. We — the angry man, a few colleagues and I — were sitting in a conference room, heatedly debating an advertising campaign. He was angry because he had become the butt of ridicule for something he had said earlier that day. Irked by our fits of laughter, he suddenly sprang to his feet and, pointing a shivering finger, yelled a question at me, which sounded more like an urgent demand than an angry question.

Call it a demand or a question, but it took everyone by surprise, because we were not yet a country that bared its religious fangs so easily and so openly. The change of power at the Centre would happen many years later and the same question would be asked so freely and frequently that it would eventually lose its ability to ruffle people.

The question that left a room full of people embarrassed was: “Why don’t you go to Pakistan?” And the man who had the nerve to ask it looked surprised that everyone in the room looked seriously hurt.

I was more surprised than hurt. I was surprised that it happened in a boardroom during a debate, not in an alley after a riot.

That day I read more than someone’s discomfort at my freedom to laugh at him; I read the first sign of a nation turning intolerant, of India turning against India.

I was too stunned to answer him, but I took consolation in the fact that every single person in that room was visibly upset by that question. The episode gave me some degree of heartbreak, but it also gave me the seed of a story which I later developed into a novel called Vanity Bagh.

This was not the only time I felt slighted just because a country called Pakistan existed across the border. Once, when a war between India and Pakistan looked imminent, the angry man casually threw another question at me. “If a war breaks out, will you support India or Pakistan?” It took me a while to realise that times had changed and the question was not being frowned upon like it was the last time. Instead, all eyes were on me. Everyone was waiting for my answer.

Time changes everything. But sadly, it doesn’t improve anything that is deeply rooted in religious sentiments. It only makes us islands of pettiness. Look how we celebrate every religious “victory” and lament every religious “setback” on social media. Every single day I am added to virtual communities that are set up to wage a war against the enemies of Islam.

Every day I unfriend and block people, leave and report groups, fight and be ridiculed by so-called crusaders. Not infrequently some of my Facebook “friends” remind me that I owe my writing career to my religion because all my stories are about Islam and it would be ungrateful on my part to remain an atheist. How I want to tell each of them that my most cherished memories of Id are of the frugal meals an impoverished Hindu family cooked for me in my days of penury in Hyderabad. I would hungrily wolf down the Id feast they cooked for me in the open and served me in their one-room house.

That is probably why the much-celebrated stories on social media of how temples holding iftar parties and mosques doing something equivalent hardly touch me. To me, they are all as badly scripted as an average Bollywood movie.

In this fast-changing, fast-deteriorating world, the misfortune of being a victim of bigotry follows me everywhere. Last year in Athens, I chanced upon an American couple who were apparently lost in the meandering alleyways of Plaka district and were searching for a way out of the maze. I went up to them with directions to the nearest metro station, but the moment I opened my mouth the man shooed me away. Later that night I ran into him in the hotel lift and he apologised to me for mistaking me for a Syrian migrant earlier that day. Europe is full of them, he said. That is why Europe is in a soup. The US is better insulated against the menace.

All said and done, it is easy to become petty-minded and self-centred. I remember how the girl I was once deeply in love with caught me unawares with just one question. We were sitting in a park and suddenly the muezzin’s call started. She hastened to cover her head and stayed silent until the azan lasted while I smirked at her exaggerated air of devotion.

When the azan ended she asked me casually, “If I were from another religion, would you have converted if my family insisted?”

“Really? But you always say you don’t have a religion.”

The author is a school dropout who went on to become a writer. He burst on to the literary scene in 2012 with The Vicks Mango Tree and since then, every work that he has come up with has made a splash and won awards. His latest, The Small Town Sea, is also making waves.