As it brings more people online, a phrase that is heard most often since the onset of 2018 is ‘Fake news’. 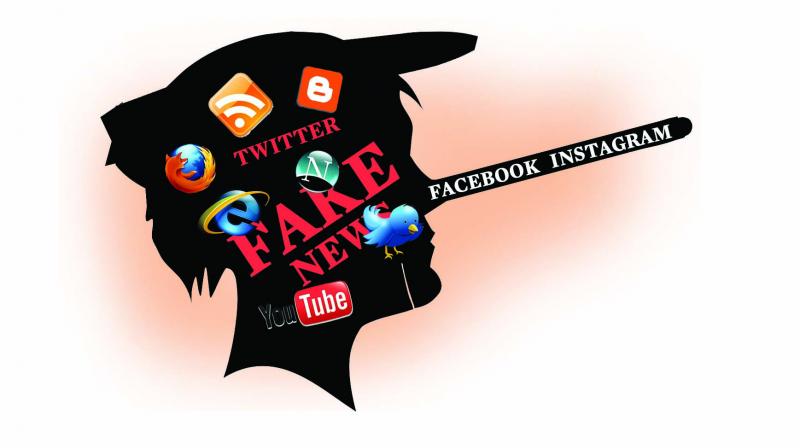 A year-and-half down the line, Zuckerberg was sitting in front of attorneys being probed, as the world watched his confessions.

The menace of ‘fake news’ has engulfed society thanks to the online social media where people are spreading lies faster than the truth. Every person has encountered fake news which experts say is not going to go away anytime soon, suggesting that it is time to make a collective firefight to contain it.

With the great power of the web comes greater responsibility. Internet penetration has dramatically increased over the past two years, giving people the power to use the web. As it brings more people online, a phrase that is heard most often since the onset of 2018 is ‘Fake news’.

Facebook CEO Mark Zuckerberg was asked whether social media contributed to Donald Trump winning the US presidential election in 2016. At that time, he termed it as “a pretty crazy idea”. A year-and-half down the line, Zuckerberg was sitting in front of attorneys being probed, as the world watched his confessions.

By mid-2018, every person has encountered ‘fake news’ — a term which is going to reverberate more than ever, for fake news is not going to go away anytime soon.

People are consuming a lot of information each day and a lot more is coming online each day. From Chicago in the United States to Chandrayangutta in Hyderabad, people are becoming fish in the ocean of fake news. Once a message is seen, it cannot be unseen. A unique characteristic of fake news is its timely nature. Consider the case of the recent fuel price spike in our country. Suddenly a lot of citizens were alerted about fuel prices in different countries and how people are dealing with it. One such message shows a picture of a huge number of cars deserted by Germans protesting against rising fuel prices. Turns out the image in circulation is related to the worst traffic jam in China in 2010.

Apart from the timely nature of the fake news, people tend to believe it because it strikes a chord with their political and religious inclinations. Added to that, the more number of times a message is sent, the more one trusts the message. This is more so when a dear friend or relative sends out the message.

People are acting on fake news because they don’t know it is false. Take news circulated about health. When the Nipah virus broke out in Kerala, a message which reads ‘Gelsemium 200, Homeopathy medicine for Nipah Virus, Weekly 3 doses for 3 weeks. It can protect you from the virus. Please do share it with your friends and family… May you all be safe (sic)’ was widely circulated. Studies found that Gelsemium which used for anxiety and heart rate variability was used in dilutions for this homoeopathic drug with 5CH/15CH and 200CH respectively. Many people in our country are eager to believe that alternative treatments can cure them and so deny treatment of supportive care which is life threatening.

As far as law and order is concerned, an incident of fake news or fake propaganda about child kidnapping across many cities in India and abroad, spread like wildfire leading to murder of a person.

Hyderabad Commissioner of Police Anjani Kumar said, “We have videos of Afghanistan, Iraq, Mosul, Sri Lanka, Burma of gory incidents of children being killed which are being downloaded and being circulated on WhatsApp as if they are from Hyderabad. There are tender minds who cannot identify if the video shown is made in Hyderabad or Syria. It is a common challenge to all and society has to address the issue under the framework of law.”

Politicians are amplifying instead of countering

If a person has strong political or religious inclinations, it is easy to mislead them by creating bias. A picture of Pandit Nehru was circulated during elections wherein he was seen smoking and hugging several women. He was affectionate towards his nieces and sisters, but the image suggested he was a womaniser.

A photo of Prime Minister Narendra Modi holding a broom and humbly cleaning the floor, which went viral during the 2014 election, was revealed to be fake by an RTI query.

Political parties are using fake followers and bots to increase their reach in spreading misinformation. If a certain amount of people start believing the crowd then real people will soon join.

Ascertaining is a Challenge

Sometimes we can identify news as fake and many times we cannot. Fake news isn’t easy to find as people continue to passively scroll through it instead of probing it. At least on Facebook and Twitter the information can be flagged, but in WhatsApp, even the company itself cannot read the messages being forwarded. Messages are also being localised.

They are translated into different languages and the names of places are changed to cater to the target audience. Part of a video created by an NGO in Pakistan to show how easy it is to kidnap children, was cropped. It was added with an image from Maharashtra, Andhra Pradesh and Telangana state saying that non-locals are kidnapping children to create panic.

Government in its urge to get more people on the internet has failed to come out with long term or even short term plans to curb fake news. Its essential to reach out to the populace especially because the misinformation can be weaponised during communal riots. “People who are attacked are often nomadic tribes. No votes are to be gained, so nobody speaks out.

Lynchings could have been prevented if the government had anticipated them,” said Pratik Sinha, founder of Alt-News, a fact-checking site.

Even the media has been playing a divisive role, especially social and electronic media. In an urge to give minute-to-minute updates, a lot of information is spread without checking.

Fact checking websites and social media platform can take limited action as there is no assessment on reach of the news. Social media platforms are taking it upon themselves to curb fake news given the negative publicity they are getting due to the spread of fake information. While Facebook released a three-pronged strategy, Twitter is partnering with law enforcement agencies to curb fake news.

For the Karnataka Assembly elections, Facebook tied up with fact checking website Boom to stop spread of fake news. WhatsApp started showing the symbol “forwarded” when a message is just forwarded and not created, as it cannot read messages from people. They are even asking researchers to give possible solutions to curb fake news. With fake news impacting elections, even countries are taking strict action. “Anyone who is deliberately spreading fake news could be liable for criminal action. There is the Twitter and Facebook account of the police where people can fact check. We are releasing announcements periodically. Or reach out to the localstation house officer. All their contact numbers are available online,” added Mr Anjani Kumar.

It is imperative for us people to check the validity of messages as it is our collective responsibility to stop spread of fake news. Psychologist Julie Hotard has pointed out that both the average citizen and large mainstream media organisations are incredibly naïve about deception from propagandists pushing agendas. She says, “We swim in advertising like fish swim in water. It feels like a normal part of our environment. Some people become aware of how pervasive it is, only when they vacation in a wilderness area without cell phone, TV or Internet coverage. It seems so normal that we only notice it if it becomes absent. We’re like a fish being thrown out of our usual cloudy water into clean water.”

Fact checking can reduce 50-60% of fake news. People can search for veracity of the message by looking up site they trust and use the query to check the correctness of data at ‘site: ncrb.gov.in’ (query)

Check for spelling mistakes, lots of capital letters, dramatic punctuations like ?!?! or ….! Or …>!

Most fake news predict future disasters and come as warning

It often comes as an appeal or a headline which is attention seeking. Question the source and look for confirmation

If you get a link in the message, check if the website has something like ‘.com.co’, ‘.co’, in the message which is illegitimate site. Words like ‘real’, ‘true’ and unusual characters are in the links