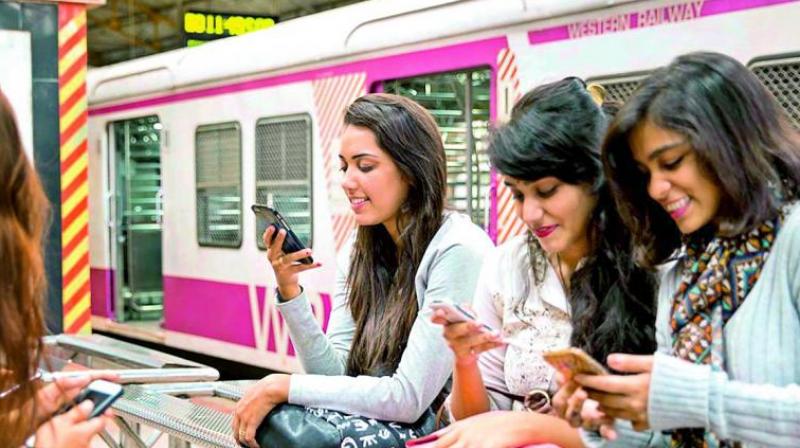 The test bed at IIT Delhi has been created by with help from global telecom player Ericsson and serves as an incubation centre for startups.

The fifth iteration in mobile communication, just 2 years away, will profoundly affect both nations and individuals in radical new ways. And for a change, it looks like India will be at the vanguard of developments.

In the 45 years since Motorola engineer-inventor Martin Cooper made the world's first commercial voice call from a portable instrument, on the streets of New York, the technology of mobile, cellular telephony has seen four up ticks, roughly one every decade. In the process, bulky analog phones gave way to sleek digital instruments; text-based messaging became a popular additional service; phones could access the Internet at ever zippier speeds — and the tail wagged the dog: data replaced voice as the primary vehicle of communication.

The fifth generation of cellular network technology — or 5G — is over two years away. Yet there is a palpable air of excitement and expectation, a flurry of announcements by phone makers, telecom providers — and governments — which makes this different from all earlier advances in the mobile phone business. Why?

Experts tell us that 5G will profoundly affect global economies on one hand and peoples’ lifestyles on the other. It will have as much impact on society as electricity did in an earlier age, they predict, triggering a new industrial revolution. The mobile phone will cease to be a gee-whiz gadget and will morph in to a general purpose utility like power or water or transportation. A tool to connect people to people — and information — will transform into a new fabric connecting people to everything.

This is because, the next generation of mobile handsets will debut at a time when the Internet of Things (IoT) has become a mature, robust reality: the interconnection via the Internet, of computing devices embedded in millions of everyday objects, from toasters to doorbells to street lights, enabling them to send and receive data. To be able to harness the dozens of such connected devices that any one individual commands, a central communicator is necessary in every one's hands. It has to be cheap, simple and ubiquitous —and mobile phone has no competitors for this role. Last month, official numbers from the Telecom Regulatory Authority of India (Trai) put the number of telephones subscribed at just over 1.2 billion — that is 93 out of 100 Indians. Even allowing for some duplication of phones, this is an awesome reach.

This is also perhaps the reason that, this time around, India is not a late follower but in the vanguard of developments to ensure readiness for the switch over to 5G. Industry and government are on the same page: as you read this, 5G test beds are being set up at multiple locations, where the readiness of networks and devices for next generation cellular communication can be tested and prototypes run. A test bed is a lab environment where multiple wireless technologies like millimetre waves, Multiple In Multiple Out (MIMO) and backhaul can be simulated with realistic loads. Such systems created by Indian academics and engineers are up and running at IIT Madras and IIIT-Hyderabad. The test bed at IIT Delhi has been created by with help from global telecom player Ericsson and serves as an incubation centre for startups.

The states are also stirring themselves: Karnataka has signed an MoU with Finland and is drawing on the expertise of Finland-headquartered Nokia which has its main Indian R&D facility in Bengaluru, to put the state on the 5G map. India’s leading telecom providers have made their own arrangements to be 5G ready in good time for the global rollout that is expected to happen in 2020. BSNL has turned to Nokia and its “5G First” end to end solution, while Reliance Jio has partnered with Samsung. Airtel has announced a strategic partnership with Korean telecommunications service provider SK Telecom to leverage its expertise to build the most advanced 5G telecom network in India. It has also announced that it is poised to deploy state-of-the-art Massive Multiple-Input Multiple-Output (MIMO) technology, key enabler for 5G networks, starting with Bengaluru and Kolkata (see box below: ‘Father of MIMO’).

At its factory at Oragadam near Chennai, Nokia is set by this month end, to manufacture 5G-ready Air-Scale base stations — the equipment that allows telecom providers to offer 5G-speed services. This is Nokia’s lar-gest production unit and these base stations will allow operators to make a smooth transition to 5G while still supporting 4G from the same hardware... and will also see India export 5G hardware to the rest of the world.

Meanwhile the ubiquity of mobile Internet is helped by initiatives like the RailTel-Google project to provide free WiFi at railway stations — over 200 last month.

The smack of firm purpose is also visible in official corridors. The government has constituted High-Level 5G India 2020 Forum with three Secretaries of key ministries or departments relating to telecom, Meity and DST, and has coopted renowned experts like Dr. A. Paulraj, Professor Emeritus of Stanford Univ-ersity,, Mr Gururaj Deshpande, the chairman of Sycamore Networks, Sandstone, USA, Indian industry led by CEOs of the infotech and telecom industry, Telecom Standard Development Organisation of India (TSDSI), Professors from IIT Madras, IIT Mumbai, IIT Delhi, IIT Hyderabad, IISc Bengaluru, IT industry and stakeholders from industry associations. The Forum will provide leadership across the public and private spectrum to ensure a coordinated and time-bound rollout of 5G technologies and infrastructure, and more importantly, the nurturing of innovation and generation of intellectual property in 5G arenas. The Forum is chaired by telecom secretary Aruna Sundararajan, a veteran technology administrator, who has headed the infotech department as well as the Bharat Broadband initiative during earlier tenures.

The harmonious coming together of academic, public and private players at this early stage bodes well for India’s ambitions to leverage futuretech like 5G for governance and citizen empowerment. The bits and pieces are falling into place. The prognosis is good that ‘5G hai ji!’ will be a real and meaningful mantra for Indians, two years down the road

What 5G can do for you
At the Global Mobile Broadband Forum (Global MBBF) in London last month, Huawei identified the top ten  most promising 5G use cases: