Discourse   11 Jun 2018  Europe can demolish at will
Discourse

Europe can demolish at will

Dams, natural or manmade, across drainage systems, vary depending upon the order of stream in a hydrologic sense. 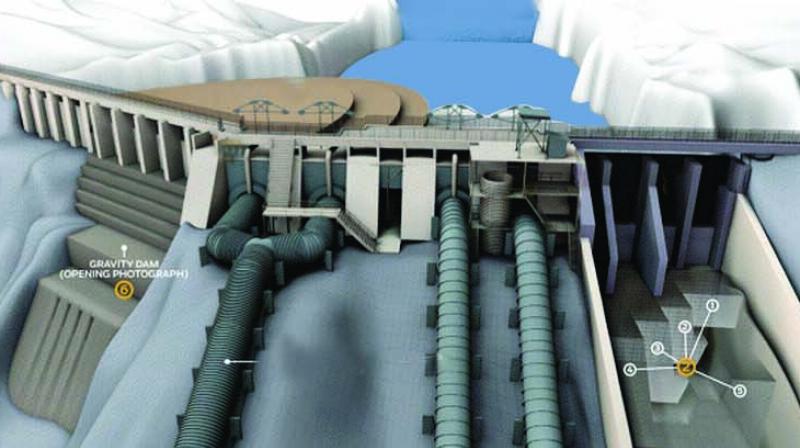 Decommissioning of dams’ is the new buzzword, especially from the developed world. Naturally. Was it not a case of overexploiting natural resources more for their greed than need, as often seen?

What does ‘dam decommissioning’ mean? Does it aim at making rivers flow as they used to in their virgin state, may be hundreds of years ago? A dream to restore an ecosystem to its virgin state, as it obtained in historic times?

Reviving rivers to their pristine form by advocating advantages for ecosystem restoration, but decoupling the dynamics of present days’ “human needs” is not acceptable, let alone a panacea, in the context of exploding populations in several parts of the world.

Dams, natural or manmade, across drainage systems, vary depending upon the order of stream in a hydrologic sense. Dams across river valleys and canyons also form part of rainwater harvesting by human intervention. Of late it is argued by certain groups, mostly from developed countries such as the USA, Australia, Japan and a few European countries, that rivers could be restored to their pristine form for ecological conservation. There is a strong advocacy lobby for aquatic ecosystem restoration arguing that it is of high value to society.

River restoration, when possible without clashing with other needs, no doubt could be an option, as for example in Nordic countries, where extreme variations in precipitation are minimal and agriculture is not top of the agenda. They do not face population pressure, a common feature in Asia and Africa.

Elsewhere on the globe agriculture remains top of the agenda with better food affordability and security. Even in Europe, what is relevant for Nordic countries — Denmark, Finland, Iceland, Norway and Sweden and others in the upper latitudes — may not be so for the rest of the continent. In countries such as Spain and France, agriculture remains a key activity, given their better arable land and production possibilities. Some of these nations feed the rest of Europe just as the American West is the facilitator of food basket of the entire country, despite water-related issues.

The annual per capita storage available in Russia is about 6,103 m³; Australia 4,733m³; USA 1,964 m³; Spain 1,410m and Turkey 1,739 m³ whereas in India it is just 225 m³. There are numerous problems in creating new storage due to associated problems of land submergence and rehabilitation of people which are considerable in densely populated countries. Can India dream of losing whatever little it has by decommissioning a few of its dams under such a situation?

Why is India different and the western or European idea to decommission is inappropriate for it? India, with its limited water resources and arable land, has to cater to an ever-increasing population which could cross 1.6 billion by 2030.

When farmers commit suicide owing to crop loss or unremunerative prices, dismantling dams to restore lakes and rivers to their pristine status, comprising natural terrestrial and high-value aquatic ecosystems, is a luxury. It entails a heavy cost. The erratic monsoon climate has demonstrated higher rate of farmer suicides year after year. Such a situation does not exist in countries looking at decommissioning dams, in Europe, USA or Australia.

Many practices in water management in India are centuries old. This demonstrates the rich experience of a monsoon-fed country. Because of the erratic pattern of rainfall and natural availability of water, temporal as well as spatial, numerous traditional solutions have emerged over centuries.

Knocking off dams and storages as part of ‘decommissioning dams’ will deprive developing countries of self-sufficiency in food. It is nothing but suicidal, especially in the changed paradigm of climate change and more severe and erratic pattern of rainfall that causes floods and droughts with consequent losses. Dams help combat this and are thus the backbone of a developing country.

With the recent advances in technology, the life of dams could be extended further by redesigning the structure and enhancing its safety. Dam engineers endeavour to critically analyse dams in their portfolio for soundness, by examining the dam's health from different angles like hydrologic and structural safety. Technology has made available tools for a fair prediction well in advance of inflows into reservoirs; these help better operation management through a systems approach.

(The author is a fellow of the Indian National Academy of Engineering, and an honorary dilpomate of the American Academy of Water Resources, and president of the New Delhi Centre of the World Water Council)