Agriculture outside the city increases the Urban Heat Island effect due to increased moisture supplied by irrigation. 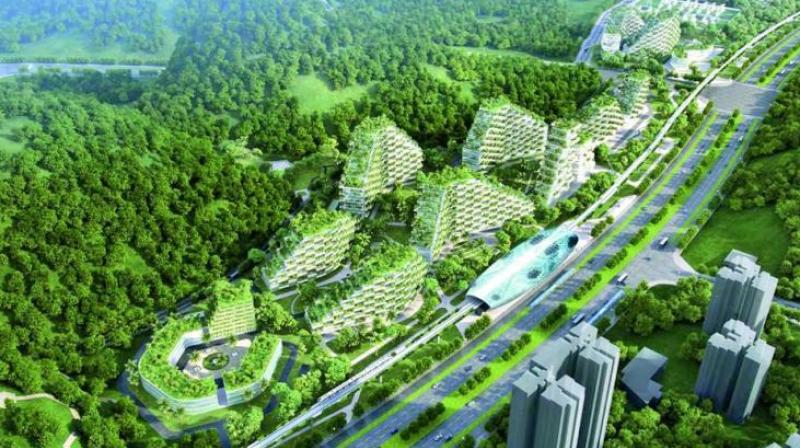 Food plants in residential buildings can reduce temperature during the summer season, but may not mitigate climate change.

Agriculture outside the city increases the Urban Heat Island effect due to increased moisture supplied by irrigation. To mitigate heat in the cities, it is important to have green spaces inside the city.

Urban areas across the globe are in the grip of temperature extremes and emit a significant amount of greenhouse gases, which are responsible for climate warming. Green cities with more trees and water bodies can help to reduce extreme hot temperatures during summer.

Food plants in residential buildings can reduce temperature during the summer season, but may not mitigate climate change. These are usually seasonal plants and do not capture substantial atmospheric carbon. (Carbon dioxide and other greenhouse gases are recognised as one of the prime reasons for global warming.)

Greening buildings, tree-lined streets and parking lots can help bring down excessive heat. Water in the plants and soil increases the amount of evaporation, providing cooling. During the monsoon season, when humidity is high, the presence of plants on roofs and inside buildings may increase heat stress. This is primarily driven by the combination of temperature and humidity. Nevertheless, growing plants helps to cool down the local temperature. Even in cities, more green spaces and water bodies help reduce the urban heat island effect. So in cities, it is extremely important to conserve trees and water bodies. Moreover, as cities are rapidly growing due to increasing urban population, more green cover and water bodies are required.

We have been studying the urban heat island effect. In October 2017, we published a paper in Nature’s Scientific Reports titled ‘Dominant control of agriculture and irrigation in Urban Heat Island (UHI) in India’. It was a study of the surface UHI effect in 89 Indian cities which the Union Government had chosen to develop as smart cities. Our results from observations and climate models show that agriculture and irrigation are two dominant drivers of UHI in India. Urban Heat Islands are formed because of higher heat capacity of buildings.

Due to this, urban areas absorb a lot of heat during the day and emit it during the night. Therefore, evening and night temperatures of cities are much higher than surrounding rural areas.

Depending on the size of urban areas and nature of vegetation in rural areas, the urban heat island can raise the temperature of cities up to five degrees Celsius. This higher temperature in cities due to UHI can be detrimental, especially during heatwaves.

According to our studies, agriculture in areas outside the city would increase the urban heat island effect largely due to increased moisture supplied by irrigation. To mitigate heat in the cities, it is important to have green space inside the city.

Many cities across the world have started seriously considering greening to mitigate the impact of climate warming. China is working on a project to create a fully green city.

In India, policymakers must ensure that green spaces in cities are conserved, and add more trees. Water bodies also need to be conserved.

Smarter building materials will help deal with the heat to a great extent. White tiles and colour increases the albedo (reflectivity) of roofs.

White ensures that more incoming energy gets reflected and buildings absorb less heat. Ideally, buildings should be designed considering the plant space and heating during the day. This can also reduce cooling energy demands in residential areas.

While greening of urban areas is important, between a rooftop garden and a strip of farmland, the latter can reduce temperature to a greater degree. This is because farmland soil has greater moisture content.

(The author is Associate Professor, IIT Gandhinagar. He has been studying climate change in urban areas and the urban heat island effect. His areas of research include climate variability and climate change, global food and water security, surface water hydrology, water resources management and large-scale hydrologic modelling. His team has developed a near real-time drought monitoring tool).