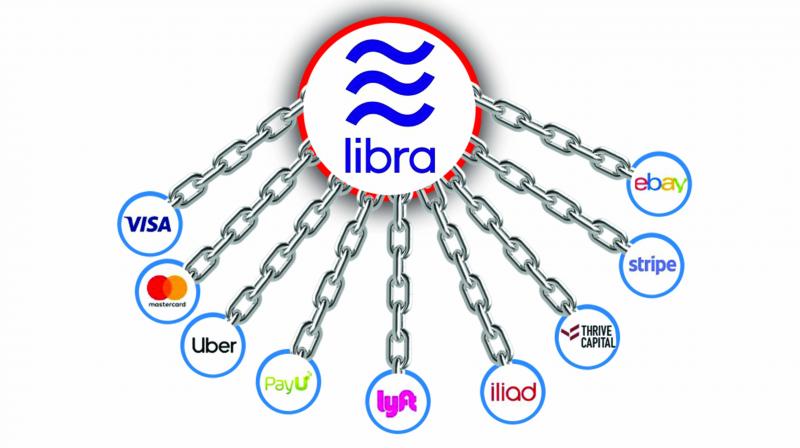 The big new tech news recently has been the launch of Libra; a Block-chain-based payment system and currency unit promoted by Facebook.

The big new tech news recently has been the launch of Libra; a Block-chain-based payment system and currency unit promoted by Facebook. What Libra ultimately will be is a bit of a mystery. Much of it is “white-paper” based, with enough hints to keep every wag guessing. Some of the mystery is deliberate (suspense marketing), some due to regulatory reasons (many aspects of Libra fall foul of current laws in many countries) and some because much of it is actually work-in-progress. (Libra will be launched sometime in 2020).

This is what we know

Many people have called Libra a crypto currency. Facebook itself has shied away from calling it such given the negatives (money laundering / illegal transactions / speculation) associated with crypto currencies

However, Libra is very, very far from a proper crypto currency structure.

Imagine buying a sack of coffee beans from Brazil sitting in Mumbai. To check the weight of the sack you can appoint a company to verify. This company might do a poor job or even cheat you in connivance with the Brazilian coffee trader

Or you can go full blockchain. A participating group of merchants in the Brazilian coffee market is asked to independently weigh the sack. The most popular answer is taken as the correct weight. Any merchant can participate and the correct answer(s) gets a small fee. The catch is a) Only the fastest 25 merchants get the fee b) All merchants need to first solve a tough puzzle. This requires a machine which has a running electricity cost.

Since a large number of merchants who do not know each other participate, it is practically impossible to cheat and produce a wrong answer

If you can imagine replacing buying sack of coffee bean with creating a bitcoin unit, voila you have cracked crypto currencies!

Looking at it holistically, trust including the creation of crypto currency units is guaranteed not by an overbearing big daddy but by multiple self-interested strangers working towards a goal of economic self-interest (and consuming a whole lot of electricity in the process!).

The disadvantage of this method is that safeguards built into the system make it both slow and expensive.

Libra is quite different from this decentralised system. The approvers are defined and they follow a blockchain-based approval system that is not based on computational power

It is like a Paytm transaction, which after being initiated, is approved by a set of 100 designated approvers, using a set rule, rather than Paytm itself.

Instead of one big daddy you now have 100 big Daddies.

In fact in the crypto space, Libra would have maximum similarity to the private coin issued by Ripple called XRP rather than bitcoin

This “cop-out” by Facebook allows it to address a lot of the concerns people have about the crypto space. (Unknown approvers / Cyber attacks/ inadequate KYC)

Now we come to India

In India the reaction to Libra has been very tepid to say the least. The RBI has soft-indicated that Libra in its current form won’t be allowed.

There are crucial areas where Libra causes concern to the regulator.

a) RBI has always held its cards very close to the chest regarding monetary policy. There are multiple ways in which new currency units can be created via Libra leading to loss of monetary policy control. For instance in a crisis, RBI might want to flood the system with liquidity. However, in a given crisis, people might use the additional liquidity to buy Libra as a safe harbour, effectively negating RBI policy action.
This becomes a bigger problem if Libra becomes a currency behemoth with universal acceptability.

b) RBI has been very strict with KYC norms. Although Facebook has officially said it will adhere to KYC norms, even in the best-case scenario, Libra's KYC will not be as strict as opening a bank account. Also unlike Indian entities, RBI will not have any control over Facebook and how it's actually implementing KYC rules,

c) Libra can be held virtually and transferred to any global jurisdiction. An Indian can buy Libra in rupees in India and transfer to a relative or a related party's wallet outside India for him to redeem in a foreign currency.
Currently FEMA has very strict rules about the transfer of INR outside India and Libra will be violating a large number of these rules.

Despite all these reservations, RBI should allow Libra for one and one major reason. It will give competition to companies like Visa, Mastercard and Paypal who have steadfastly refused to bring down their fees and foreign exchange conversion charges. Instead of paying 2 to 7 per cent in fees and currency charges, a buyer can just buy Libra and transfer to the
seller.

The Libra competition will dramatically lower interchange fees, facilitating the process of digital inclusion in India.

What about the concerns?

There are four ways to address the concerns. These can be implemented standalone or in conjunction with the others.

a) Make KYC norms same as payment wallets
b) Restrict Libra to only domestic transactions within the Facebook framework.
c) If Libra is used for international transactions, restrict Libra to only a means to transact
d) If Libra is used as an international store of value, make Libra compatible with FEMA regulations through smart use of Aadhaar and Pan card verification.

There are various problems with these measures. For instance, keeping Libra within a domestic ecosystem will make Libra like a Paytm wallet or JPMiles, with some added ecosystem benefits.

Also if RBI has to achieve the regulatory goal of lower interchange fees, RBI should allow Facebook to issue a credit card with Libra.

The most ambitious goal of allowing Libra as an international store of value would conflict heavily with FEMA. In a nutshell, FEMA states that currency can be transferred outside the country only for

a) approved expenses (travel, education, etc.)
b) approved (albeit liberal) set of investments.

The remitting bank has to take responsibility for both KYC and end use. An annual limit of $250,000 per person is placed.

It is interesting to note that credit cards are effectively exempt from this regulation (RBI doesn’t do one-to-one checking of international card transactions).

A potential solution would be to have a three-tier account opening process for Libra.

a) Basic - No / Limited KYC
Libra will be used for only domestic transactions in Facebook ecosystem with a maximum cap on transaction value.

b) Classic - Same KYC as payment wallets.
Basic + customer is allowed to store value domestically + customer can do international transactions within Facebook ecosystem without storing value.

c) Premium - Full bank level KYC.
Classic + customer is allowed to do transactions outside the Facebook ecosystem and allowed to store international value.

Here PAN / Aadhaar would be be linked to monitor cap of $250,000. This has to be combined with relaxation of Fema regulation allowing opening of foreign currency deposit accounts

We cannot fight technology, especially something that promises to give additional options to customers and (at least on paper) helps reduce digital transaction costs. Having pro-active, forward looking regulations will not just help achieve these goals, but also allow us to be ahead of late moving countries.

A progressive ecosystem will also provide a boost to Indian IT developers and companies doing software development work in the Libra ecosystem. ends

(The author has worked with Deutsche Bank as a director and JPMorgan in their Global markets division. He has headed India for Uphold, a Silicon valley company that uses Blockchain and Cryptocurrencies for International remittances and Kristal.Ai, an AI driven peer sourced investment platform)