Social justice movements seek the removal of racist Civil War era symbols from public spaces amid the rise of far-right white nationalism in US. 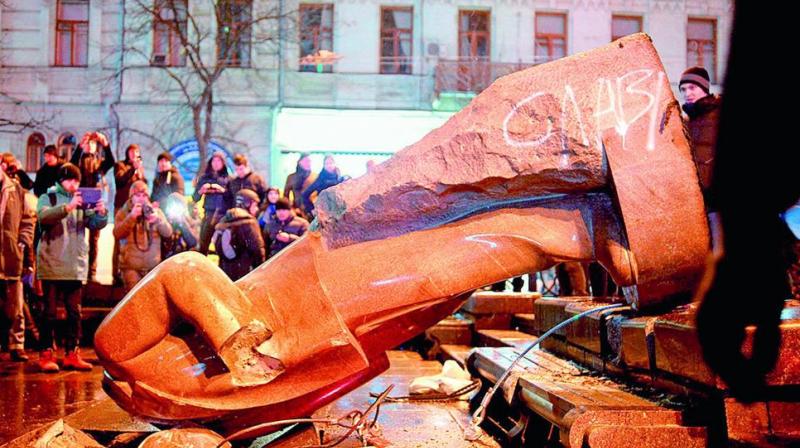 A statue of Soviet state founder Valdimir Lenin was toppled by protesters in Kiev during a rally organised by supporters of EU interation.

Icons and statues are symbols. These symbols are materially connected, intertwined with economic logics and the struggles against these prevailing economic logics. On one hand, the production and circulation of symbols is an economic activity. On the other hand, symbols have material ramifications that are tied to relations of power in society, both reproducing existing social configurations as well as offering windows into the possibilities for social transformations. It essentially means that depending upon the transformations we see in any particular society, as power shifts, so does the nature of celebration or desecration of symbols. Symbols in this sense work to reproduce particular images to tell particular stories and therefore for those in positions of power, these symbols become critical resources that are mobilised to serve particular goals. For those at the margins of society, the struggle is often over securing access to the sites of symbol making as well as over removing material markers of oppression.

The fundamental idea behind democracy is its openness to a wide range of symbols, which offer a window into the plurality of ideas. These symbols stand in as anchors to divergent thoughts and opinions and as markers of the possibilities of debates and differences in a society. Look at the recent context of desecration of the statue of Lenin in Tripura, the Ambedkar statue in Meerut, the defacement of the Periyar statue in Tamil Nadu and the Shyamaprasad Mukherjee statue in Kolkata. The latter had existed throughout the entire period of Left rule in Kolkata. Usually, when you have a space that actually is open to difference and is committed to democratic ideals, each of these statues, symbols and images have an opportunity to stand in as a discursive register. The question then remains: What are the limits to the public presence of symbols in democracies? What about those symbols that are in essence antithetical to ideals of democracy? This question needs to be contextualised in the ambits of the struggles for social justice and equality against the dominant images that legitimise erasure.

Look for instance at the tensions over the removal of Confederate statues (markers of White supremacy and support for slavery) in the US. These tensions are reflective of struggles over power in perpetuating racist ideas, the opportunities for transformations in these racist logics that have for long served as dominant ideas of the US, and the deep histories of slavery and racism in the US. The emergence of movements for removal of statues of the leaders and members of the Ku Klux Klan and defenders of slavery is a transformative opportunity for interrogating and challenging the deeply racist rationalities that threaten human dignity and equal opportunity. Particularly amid the rise of far-right White nationalism in the US, social justice movements seek the removal of racist Civil War era symbols from public spaces.  Similarly, consider the presence of statues of colonial figures in post-colonial contexts. These statues are reflective of a colonial past and a history that is fairly oppressive, with those particular icons being markers of oppression and attack on human freedom. The struggle for removal of these statues is a narrative anchor for making claims to ideas of justice, dignity, and equality of the margins. Usually, democracies leave enough room for these markers to be present as sites of contestation, conversation, and debate. However, for groups that have historically been oppressed, the struggle against these public symbols is one of crafting a different public narrative, one that challenges the violence of oppression.

Similarly consider the emergence in public veneration of icons that were once marked as fundamentally antithetical to the spirit of Indian democracy. The presence of such a statue in a public space threatens the very ideas of pluralist democracy because they stand for the message of hate and foreclosure of democratic discursive space. The presence of these statues in public spaces threatens the very idea of democracy, marking who can and can't participate in democratic opportunities. Then the question we ought to ask is: What are the limits to icons, symbols and images in public spaces in a democracy, particularly in terms of the boundaries of how far these symbols and images go in perpetuating anti-democratic ideals? What democratic processes ought to be mobilised for addressing symbols that explicitly stand in for and perpetuate hate?
The lack of critical habits of democracy makes room for all forms of politics of heuristics, often feeding on hatred and polarisation. Symbols and imagery become shortcuts to political movements as well as co-opt possibilities of democracy through the circulation of images of hate and bigotry. They appropriate images to cultivate their particular agendas under the guise of nationalism and patriotism. So icon-politics works in terms of perpetuation of authoritarian power when citizens do not critically interrogate power but rather are driven by heuristics and emotions. The absence of reason from public discourse complements the rise in icon-based politics. 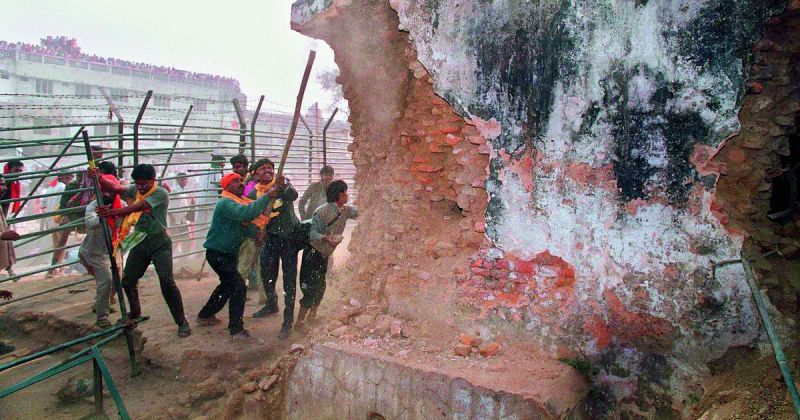 Globally, the degeneration of democratic habits in societies has been systematically accomplished through political economic transformations that on one hand have systematically privatised public resources and on the other hand, have erased opportunities for democratic public participation. The various sorts of strategies of authoritarian power and control we are witnessing globally are reflections of the democracy deficit catalysed by neoliberal policies that systematically target democracies and erase opportunities for voice even as they consolidate power in the hands of the global elite. It actually works to mobilise citizens, not as citizens, but as mobs that are driven by the seductions of collective heuristics rather than to actually reason, to participate in argument; and to participate in the everyday habits of democracy. What we then have is the habit of cult-making amid a global politics of dispossession led by the elite class. Examples are galore of cult-making through holograms, brands, images and the management of images as spectacle, with political party investments in gargantuan campaigns becoming the norm. Observe for instance the tremendous growth in the large-scale image-based promotional campaign industry facilitated by big data, which is antithetical to the very ideas of everyday engagement and reason grounded in processing information critically. Cult-making not only works in terms of promoting narrow sentiments of religious and nationalist feelings, but also in terms of promoting wholesale the neoliberal rationality driven by "trickle-down" heuristics. Symbols emerge as tools of persuasion without being critically interrogated, silencing opportunities for discourse, debate and dialogue.

Active vigilance is a primary resource against undemocratic tendencies globally. The cultivation of the habits of democracy across a variety of institutions is a key challenge today as basic access to fundamental educational and communicative infrastructures is highly unequal across the globe. Political agendas of the ruling dispensations are worked into textbooks and into the very fabric of academic institutions. To challenge the hegemony of iconography, iconoclasm and related symbolisms in academia, media, and a wide variety of other communicative institutions, we have to begin by returning to cultivating and recognising the everyday habits of democracy in the grassroots. Critical thought, one that questions the workings of power in perpetuating injustice, inequality, and discursive erasure, is the antidote to the global rise of image politics.