CRISPR technology converts bacteria into a hard disk in which information can be stored. 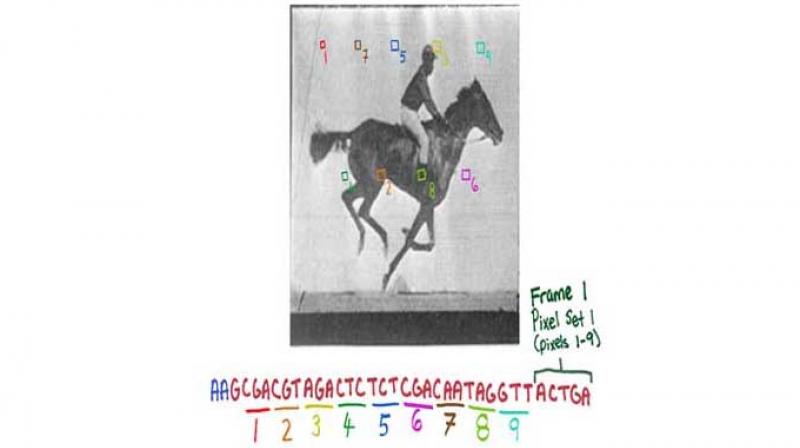 The new CRISPR technology enables the recording of digital data, like frames of the movie of a galloping horse, in a population of living bacteria. (Credit: Wyss Institute)

We live in a digital world of ever-increasing data from a variety of sources, which is curated and stored in large servers across the world. The requirement of new storage space is increasing day by day. A few years back, scientists demonstrated that simple data could be encoded in the form of DNA sequences and the data could be retrieved from the sequence of the DNA using DNA sequencing technology. Recently, researchers from Harvard Medical School led by George M. Church, in a report published in the journal Nature, have shown that complex information like an image or a movie can be recorded into bacterial genomes using DNA editing technology called CRISPRs and can be retrieved, providing the first proof of the principle that bacteria can be used as a mode of data storage, editing, and propagation.

CRISPR was discovered as an immune system of bacteria to fight against invading DNA pathogens like viruses. In the past few years, CRISPRs have been used by scientists to delete, add, rearrange and rewrite parts of genomes in many organisms, including human cells. George Church’s group was one of the pioneers in using this technology for genome editing. The CRISPR immune system in bacteria works by incorporating small cassettes of DNA from the invading viral genome to keep it as a reference library for recognising the invading DNA. Every time a new virus infects the bacteria, it incorporates a new cassette of DNA, leading to an array of cassettes. The scientists tricked the bacteria by providing the pixel information in the form of these cassettes and the bacteria incorporated the cassettes into arrays assuming it to be an invading DNA.

The consecutive frames of the movie were provided in chronological order to build a CRISPR array in the bacterial genome. After retrieving all the sequence information from the bacterial DNA sequencing, the chronological order of the frames could be rebuilt to create the movie. This technological breakthrough demonstrates that a series of events or information can be encoded into the bacterial genome and can be multiplied into numerous copies as the bacteria divide and grow. However, it is a long road to use bacteria as a mode of storing and retrieving complex data.

Bacterial genome size is a major limitation to storing large size data. Further, reduction in the DNA sequencing cost and technical advances in technologies like nanopore DNA sequencing would be essential to move towards exploiting bacterial genomes for storing complex data. Scientists suggest that the CRISPR recording system one day can be evolved into a means of recording information from places and processes which cannot be recorded by current technologies. Developing a similar recording system in other cells one day can enable us to record information within a developing embryo or cells in a particular diseased organ. This can have immense implications for understanding diseases and their treatment.

The writer is Senior Scientist, Centre for Cellular and Molecular Biology