By treating water and making it recyclable, it is being ensured that there is always water in the toilet. 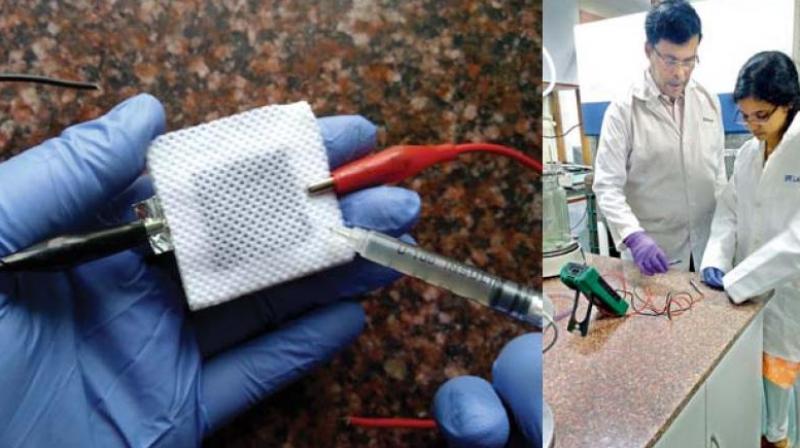 The miniature paper batteries are filled with a little sewage water for production of electricity. The cost of each unit less than Rs 5.

By the end of this month (April) or early May, a new toilet will dot the urbanscape of Noida (Uttar Pradesh).

Well, not just another toilet. It’s the first bioelectric toilet which recycles waste water for use, and in the process, generates electricity to light up the building. It costs a little more than Rs 2 lakh. The prototype was built on the campus of IIT, Kharagpur, and used through the day by five people.

“We are trying to make improvisations so that it is more user-friendly. We can bring down the cost once it is made on a commercial scale by an industry. We have not finalised the industry though many domestic and foreign industries have approached us for commercialisation of the technology,” says Prof. M.M. Ghangrekar, Department of Civil Engineering, IIT, Kharagpur, who led the team that designed the bioelectric toilet.

He told Deccan Chronicle that NTPC (National Thermal Power Corporation Ltd) is funding one toilet in Noida after the project won accolades from Prime Minister Narendra Modi as a one-of-its-kind public welfare technology developed for the common man.

“We should understand why toilets are not being used, particularly at night. There is sometimes scarcity of water because of which the toilets remain dry and dirty. By treating water and making it recyclable, we are ensuring that there is always water in the toilet for flushing. At the same time, we are harvesting power that can be used to illuminate the toilet cabin at night,” the professor explained.

The electricity generated using a six-chambered reactor in which waste water is rotated clockwise and anti-clockwise could also be used to charge cellphones or tablets during the day.

Prof. Ghangrekar and Neethu Bhaskar, a research scholar, are also working on a variant of the microbial fuel cell (MFC) which generates electricity by using bacteria as the catalyst to oxidise organic and inorganic matter at the anodic side. The variant, sediment microbial fuel cell (SMFC), has oxygen which governs the performance of SMFC.

Not far from his Civil Engineering Department, on the IIT campus, Prof. Debabrata Das, his colleagues and students of the Department of Biotechnology, have developed miniature paper batteries (measuring 3 cm x 4 cm) which help generate power from bacteria in sewage water.

“Normally microbial fuel cells (MFCs) take a couple of days to start power production as the bacteria need to get adjusted to the environment. But for this device, power production starts within ten seconds,” says Ramya Veerubhotla, a research scholar and member of this team.

“This power is too low to drive practical applications, but as the device is made of paper, we can stack multiple units to boost the output of power. We are currently trying to extend the project further both in terms of improvement of power as well as to take it to the stage of application for powering sensors, electronic components or bioelectric toilets,” Prof. Das added.

Besides the advantage of stacking many of these miniature paper batteries filled with a little sewage water for production of electricity, the cost of each unit less than Rs 5 makes them ideal devices for use in rural areas on shoe-string budgets. That’s not all. “One of the best advantages of these devices is that they are 100 per cent biodegradable and environment friendly, which is not the case with chemical batteries,” he added.

This team has applied for a patent, given such an array of advantages. Either of these two teams could, sooner or later, design devices to light up many a home in rural outreaches.