Decaf   26 Aug 2018  Runversation: The man who runs round the world to spread peace
Decaf

Runversation: The man who runs round the world to spread peace

Indian American Sridhar Reddy has been running for 30 years to to convey to the world to live peacefully and meaningfully. 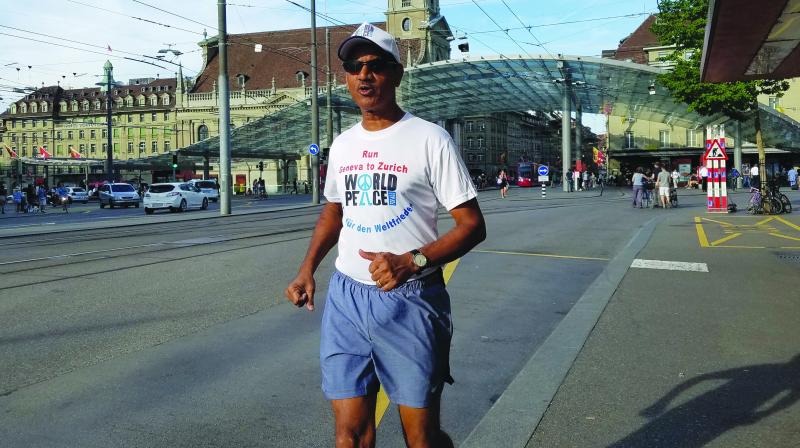 There are a lot of passionate runners out there. But it’s not only the running that they love but also the reasons they run for which keep them going.

How could one person possibly make a difference in the world where there are 7.6 billion on Earth alone? Maybe they can’t but all it takes is one person to start and make a change. One doesn’t have to be a martyr or the hero to make a tangible difference. You can tread lightly on this planet and make a positive impact to everyone (including yourself). You can keep your vision, goals and purpose intact, but you just might need to find a different route to market — may be RUN to make a change.

There are a lot of passionate runners out there. But it’s not only the running that they love but also the reasons they run for which keep them going. The drive to put on foot in front of the other and keep moving forward is at the very heart of long-distance running.

Sridhar Reddy, an Indian American, known as the ‘Running Man’ has been running for 30 years to support various social causes. He founded a not-for-profit organisation, Running For Humanity, dedicated to the betterment of the human condition. He says, “The world is facing many problems of crime, tensions and civil wars by many anti-religious and anti-social activists, I run to convey to the world to live peacefully and meaningfully.”

Doing something for a worthy cause is an emotionally-charged engagement. It is something that everyone wants, and it is so elusive to so many. Many underestimate the power of sports to create real change in society.

Sri, as he is commonly known, is involved in many charitable organisations in the US, Europe and India and holds three Guinness World Records for 2012, 2013 and 2016 for the 100-km barefoot run. He says, “Peacemaking is not a sprint, it is more of a marathon. No major changes can ever happen overnight — it requires perseverance, resolve, willpower and determination just as they are needed to finish long runs. Human spirit is capable of great things. I have seen the elusive peace, and I believe that it can become evident to all, one steady step at a time.”

Standing by for a cause drives awareness, buzz and action, seemingly sweeping up everyone in its path. Its origin can be orchestrated or organic. It starts with the question: Why do I need to do this?

“I guess God has chosen me. I am a normal human being, I have an idea and I am pursuing it and trying to make a small dent in everyday lives of people. We are living in a digital world, ever-changing and making history every moment. Everyone has the power to do something, all we need to do is open our minds,” says Sri.

So, if you’ve always wanted to make an impact, don’t wait. Start today. Today is the day for it.